GOLD AND SILVER MELT, OR MELTDOWN? Since early July, I’ve told my subscribers in the precious metals markets to take a Katusa Free Ride on all our gold stocks.

Thus, all but one stock in our portfolio has a zero-cost base and we are flush with cash.

Is it time to jump in right now?

Before we get into what to do now, let’s do a quick review of the gold market for the last nine months up to September 2020.

Gold and silver were fresh off of multi-year highs…

Retail and institutional interest were at multi-year highs…

And volumes were through the roof.

New buying and market interest led to a large number of new gold and silver exploration companies. Promoters know that when the ducks are quacking, they must be fed.

On the back of a 20% rise in the gold price in 2020, this led to a massive number of financings and raises.

While that may sound like a lot, it’s still the lowest amount of capital raised in the sector for over a decade. Take a look at the chart below to see. 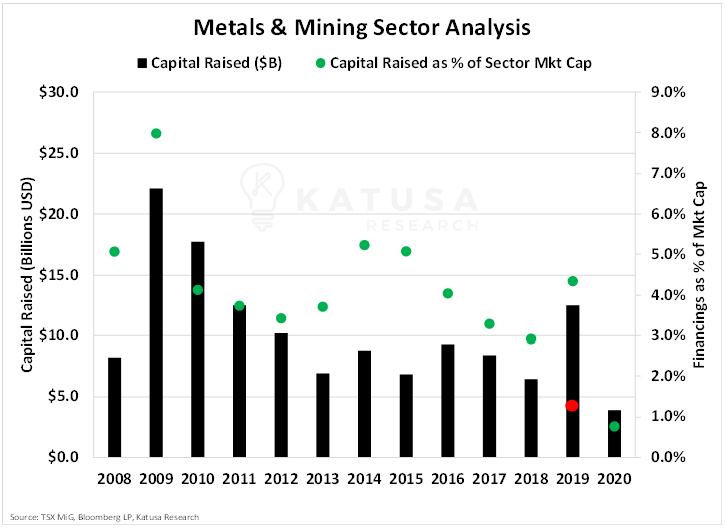 Many of the restricted shares from those financings have become free trading. And as we discussed in previous blog posts, that large issuance of new paper has put a temporary ceiling on the underlying issuers.

Selling pressure was caused by this paper hitting the market, with early investors looking to lock in gains.

Couple that with falling prices for the precious metals, and you have a recipe for a washout of weak hands.

I’m not a “told ya so” kind of guy, but I did warn this could happen and laid it all out for you in a previous missive.

And it’s not finished yet.

Yup, you heard that correctly. We haven’t seen the end of the selling pressure yet.

As you can see in the next chart, there is still A LOT more new paper about to come free trading in December. 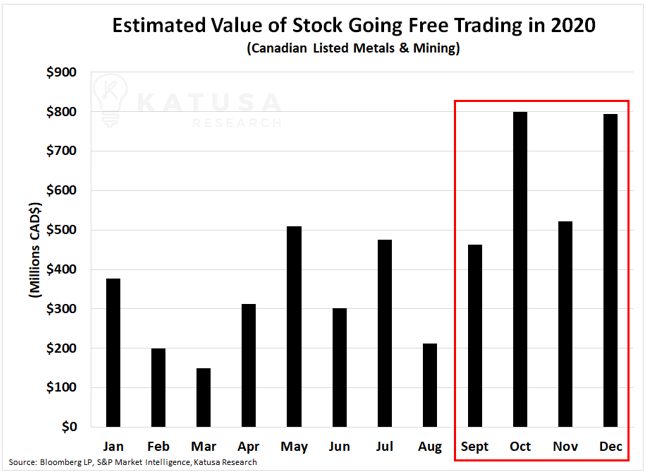 This too shall pass, but it could get uglier first.

Tax loss selling in the precious metal sector will be vicious this year.

As I do every year, I create my Tax Loss List of the best stocks I want to buy, and the prices I’m willing to load up at in the open market. Last year I had my list, and I didn’t get hit on any of my target prices.

But I got more than my fill on the best stocks in the March Meltdown just 3 months later.

I think this December will provide some incredible deals in companies that are trading under NAV.

What I’m going to say next will anger many of the gold bugs, but I need to remind everyone – I’m a profit bug.

Don’t Fall for the Hype: Gold and Silver are Still in the Minor Leagues

Gold and silver investors love using the metaphor of baseball innings to indicate where we are in the cycle.

Yes, well-known investment figures such as Ray Dalio, Stanley Druckenmiller and even Warren Buffett have recently made heavy investments in gold and gold equities.

Though, Buffett did pull a bit of a head fake when he sold 8.9 million shares of his 20 million share position in Barrick Gold.

This was only a few short months after taking the position.

So much for the buy and hold strategy… and maybe he just pulled the biggest troll job on gold bugs.

Sorry, I laughed when I saw the news as the gold bugs thought Buffett had been converted to one of them. Nope, he’s a profit bug.

Buffett, like others, sold some of their gold to put that capital to work in other sectors.

This will be hard for most to fathom, considering that many of us saw large runs in many of our gold equities and took profits and free rides in 2020.

But gold remains in the minor leagues when seen as an investment on the global stage. Yes, as important as it is to us—the gold speculators and investors and gold bugs—the gold sector is not at all important yet to the global flow of capital.

Do you think the to be appointed Secretary of Treasury Janet Yellen wants to talk about gold? Hell no.

She’ll continue with the strategy that the government balance sheet can handle much more stimulus, and stimulus will come.

Before I get onto why gold’s still in the minor leagues, I want everyone to focus on this one chart I created. 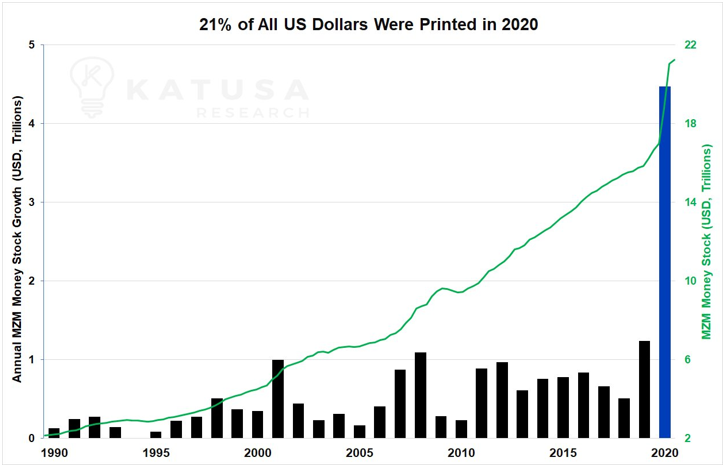 Yes, 21% of all U.S. Dollars that exist were “digitally created” in 2020 thus far. But just focus on this chart for a minute…

Has anything changed for the better?

I’d say Biden has made it very clear the more stimulus will come.

Do you really think Powell and Janet Yellen aren’t going to work together and “do whatever it takes” under a Democratic President? Meaning the printing we saw in 2020 is just the start of what’s to come.

But before it does, and before it gets promoted to the Big Leagues (which it will), for the time being if you’re savvy enough you can get the best “Big League” companies at AAA ball pricing.

Yet the established money management firms don’t even include gold equities as an option for their high-net-worth individuals. They’re still touting bank stocks and REITs (with 1 percent cap rates paying out terrible 3 percent yields).

Gold isn’t even taught in most business schools, CFA classes, or portfolio management courses. Gold investors are seen as outdated and irrelevant. A barbarous relic.

The earth under Canadian soil might hold some of the world’s most prominent gold reserves… yet the Bank of Canada, Canada’s central bank, holds zero gold bullion.

The biggest funds in Canada, such as the Canadian Pension Plan, have much lower exposure to gold and gold equities than the percentage of Canada’s GDP that comes from mining gold. U.S. pension funds’ exposure to gold is even lower.

But that’s actually all good news. 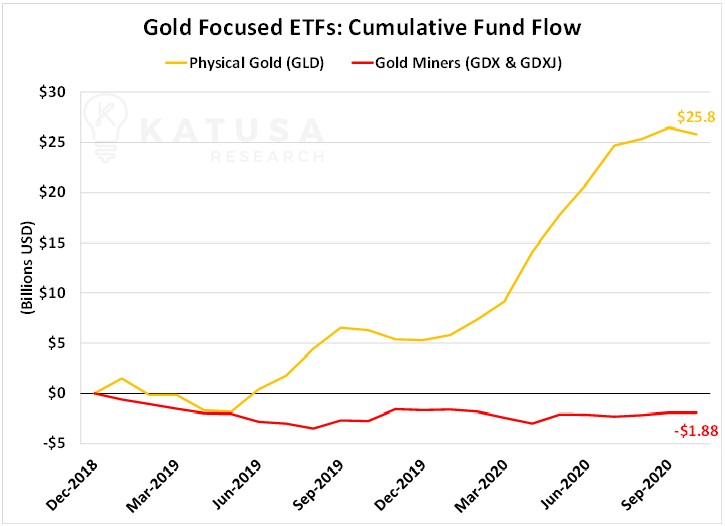 It’s All About the Flow of Capital… 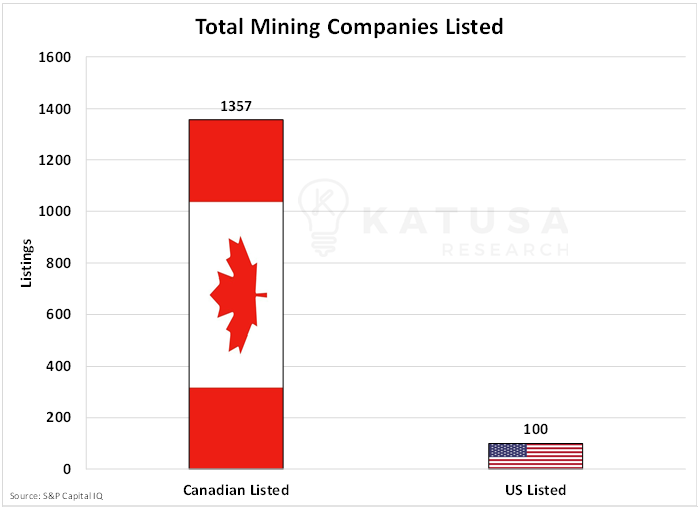 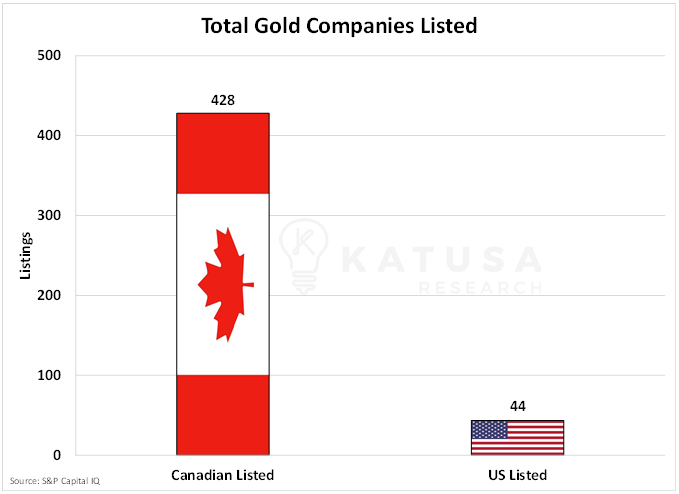 Here’s the interesting part. All but four of the gold stocks listed in the U.S. are also listed in Canada. But the dollar volume on U.S. exchanges absolutely dwarfs the volume on Canadian exchanges. 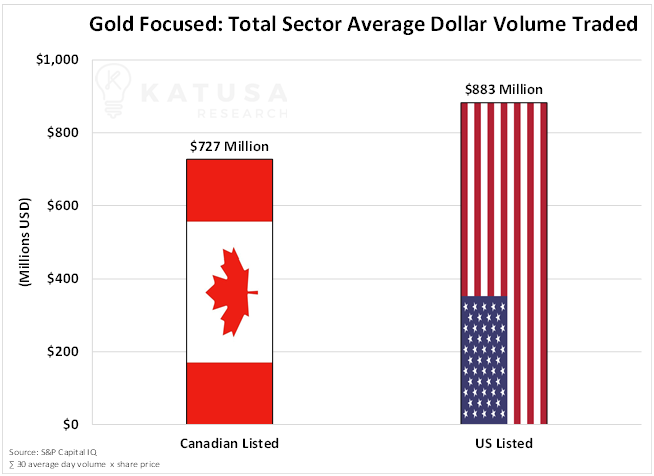 I’m Canadian, so I can say this: Canada is a small fry when it comes to the global flow of capital. I love Canada. I’m a proud Canadian. But changes are happening, and as usual the Canadian market is oblivious to it all.

Management teams don’t want to talk about the fact that the “flow of funds” into the Canadian mining sector isn’t growing.

Thus, investors buying gold companies listed on the Canadian exchange usually end up selling shares they own of another company to come up with the capital.

More importantly, the federal government of Canada is rumored to be raising the capital gains tax rate by at least 100%. This will make it equal to the tax rate of the highest income bracket in Canada.

The risk/reward just won’t make sense for Canadian investors due to the higher potential tax rates.

In addition, with all the new regulations and taxes, the big U.S. funds (active and passive) can’t and won’t buy gold companies in Canadian dollars.

The rules for American investors, quite frankly, suck.

The legend removal process on Canadian exchanges is difficult, and it’s hard for American investors to put Canadian certificates into their U.S.-managed brokerage accounts.

I’ve been advocating for years that the Canadian investment industry needs to adapt to its customer—the U.S. investor—instead of forcing U.S. investors to jump through hoops to invest in Canadian-listed mining stocks.

And there are big things afoot in this department that Katusa Research is working feverishly on.

Greedy When Others are Fearful: The Coming Katusa Alligator Stock Watchlist

I’ve been uber cautious these last few months. I’ve stated as clearly as I could, in both writing and in videos, for my subscribers to reduce as much risk as they can and lock in their Katusa Free Rides.

In retrospect, our timing on the calls has been very good.

I hold a very high cash position in USD and anyone following our portfolio should be high in cash. Even with the incredible gains in our portfolio, I’m over 55% cash.

I hold this high amount of cash (of which 70% is in USDs) because I believe we’ll see some rocky markets in the months ahead. Whenever the markets have a sell-off, the USD performs well.

And yes, as I’ve stated before, even gold sells off initially. Then the tidal wave of selling on gold miners and explorers starts (as you’re seeing right now).

The U.S. election will come and go, and eventually—there will be a victor.

In the end, it won’t matter who’s in the White House, with respect to the price of gold.

There’s one simple reason why: both parties are completely committed to unprecedented stimulus.

And I’m very close to pulling the trigger on a few opportunities that have been many, many months and hundreds of man-hours in the making.

I’ve stayed very patient since this summer and took lots of criticism for it.

This isn’t armchair investing. I eat my own cooking and buy exactly what I write about… at the same price and terms as my subscribers.

Look, you may not like my style or my personality. But I’m not here to be liked –  that’s what bankers are for. I’m here to educate, and to deliver the best returns on precious metal, base metal and energy stocks in the business.

And so far, I’ve delivered.

The next 6 weeks might not look pretty, but I’ve seen this rodeo dozens and dozens of times.

I have a blueprint for this, and an army of readers that’ve been waiting like alligators for 6 months.

And it’s almost time to eat.

This article is supplied courtesy of VentureSociety.com