When my wife and I were still dating, there was a period of about a year (2008-2009) where she worked as an actress in New York City. And while I would have loved to tag along, I had just started on a new career path as an energy consultant and needed to spend some hands-on time learning the ropes. So, I had to stay behind in West Virginia for the time being.

Fortunately, I had the option to work from home periodically. And as such, every two weeks or so, I would make the 6-hour drive from Morgantown up to NYC on Thursday night, stay the weekend, and head back home on Sunday or Monday.

The decade I spent as a touring musician instilled in me a genuine love of driving, so I always looked forward to making the trek. But I knew from all that travel experience that the more your mind is actively engaged during the trip, the safer you tend to drive. For me, that meant listening to new records, some new-fangled talk radio they were calling “podcasts,” and a bunch of different foreign language CD’s.

Over the course of that year, I managed to learn basic, functional travel phrases in German, Russian, Japanese and Arabic, as well as regain a solid degree of competence in French… zut alors!

But the trip has long, incredibly boring stretches of road. And even with all that engagement, it was still hard to focus… particularly at night, and doubly so when it rained.

One night in particular, on the Pulaski Skyway crossing the Hackensack River, it was raining so hard I could barely see. Worse, the water was collecting in pools on the road, and the blurry reflection of oncoming headlights looked like diamonds (a fantastic Arcade Fire song, by the way) through which a spotlight was shining.

And at that moment, I realized that after 32 years of flawless 20/20 vision… I needed glasses.

At the eye doctor the next day, he said that although my vision was still technically 20/20, the clarity I once had at long distances was starting to fade. And to be on the safe side, I should grab a pair of glasses to use for driving.

So, after a short wait, I picked up a pair of thin-framed, rectangular Armani frames with anti-glare lenses and headed back to my wife’s apartment.

She came in the room, took one look at me, and immediately started laughing.

From Four Eyes to Four “I’s”

Although it might have been unexpected for my wife to see a bespectacled me for the first time, she eventually came around. And for me personally, the extra set of eyes really did help provide a lot of visual clarity while navigating the New York highways.

Similarly, there are four “I’s” that have been moving markets around of late, and each of them clues us in to how the push and pull of these influences might shift the overall balance of power.

The first “I” is that there are a number of Initial Public Offerings this week making splashy headlines and throwing lighter fluid on this already-red-hot IPO market.

The biggest headline-grabbers – Doordash (NYSE: DASH) and AirBnB (NYSE: ABNB) – closed up 85% and up 112%, respectively, on their first day of trading. While that’s remarkable on its own, each has a different outlook heading into 2021, with DASH’s income set to decline once the pandemic subsides, while ABNB’s will likely recover over that same period.

My personal favorite of the bunch, however, is Peter Thiel-backed AbCellera Biologics (Nasdaq: ABCL).

Contrary to what their name implies, they aren’t biotech per se. Instead, they have an AI-powered research and development platform that facilitates new drug discoveries. Back in March, they partnered up with pharma titan Eli Lilly with the intention to develop COVID-19 antibody products, one of which was granted emergency-use authorization by the FDA just recently.

We’ll see how it trades on day one, but suffice it to say that this stock is on my own personal watchlist.

Although that’s still down significantly from the peak of the pandemic, it’s still over 4 times larger than year-ago levels, and is now apparently beginning to move in the wrong direction.

The market was able to shrug off the bad print on a combination of stimulus pumps and vaccine news, the latter of which sent the wholly undeserving energy market on a tear.

Oil demand remains terrible – EIA inventories yesterday showed the largest-ever build – and production is increasing. Combined, that should be terrible for prices, but yet here we are.

That said, the increase in production is working well for our stake in DHT Holdings (NYSE: DHT) – up 10% in just a few weeks. And similarly, we starting to see signs of life on the products side, so picking up another ¼ tranche in Scorpio Tankers (NYSE: STNG) seems reasonable.

All that liquid is going to have to sit somewhere, as demand in Europe is not likely to get much better amidst ongoing restrictions.

The third “I” we need to watch out for is inflation.

I’ve talked at some length before about how I expect inflation to be a mixed bag for a while with deflation or disinflation in some areas, and hyperinflation in others.

But that’s just for us here on these shores. For those abroad…well, they’re already feeling it in some ways. Food prices, for instance, have risen to their highest level since 2014. 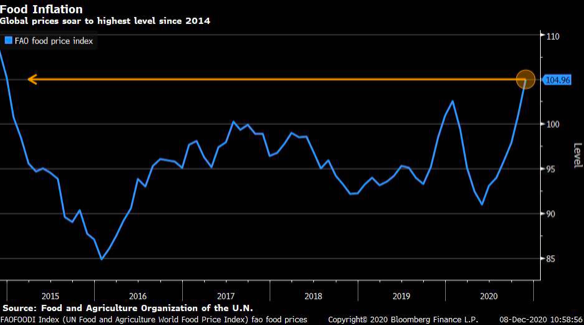 Although China’s massive food inflation problems have normalized, we’ve seen CPI for both the US and Europe tick up to around 2-3%.

And as a result, people’s expectations for overall inflation have grown. Flows into US TIPS (Inflation-protected securities), for instance, shot up to $1.8 billion – the highest level since June. 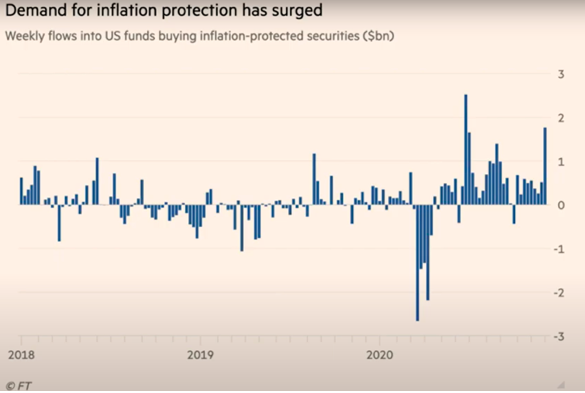 To try and offset this action, the Federal Reserve is actually buying TIPS, as they’re rightfully concerned about maintaining the forward costs here.

And that brings us to the fourth “I” – interest rates.

The yield curve – as depicted here by the difference between the 10-year and 2-year Treasuries – is starting to pick up. And when we look at that historically versus the S&P 500, there’s certainly some cause to raise an eyebrow. 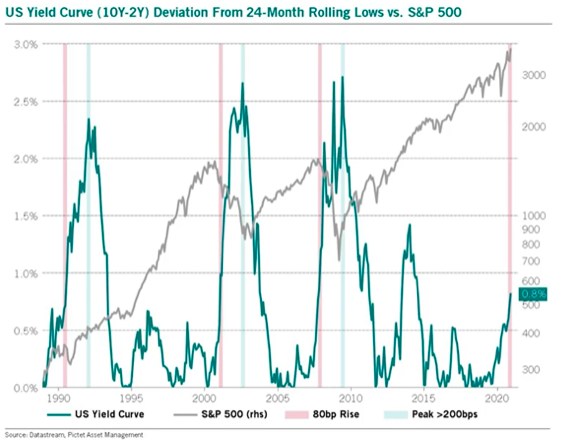 Now, in the past, this spread has moved up before without disrupting the market, but only a few times, and never with the current amount of debt we have.

And while low rates lead to funds rotating out of bonds and into equities, rising rates have the opposite effect… ›which also affects volatility. 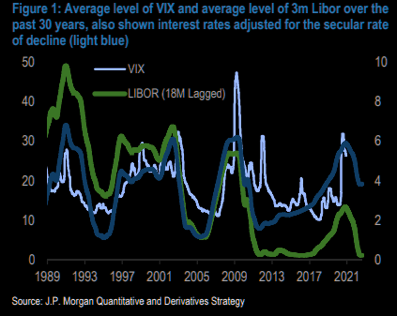 So, with inflation expectations increasing, interest rates beginning to rise, and volatility still as cheap as it is, I think it makes sense to grab one last ¼ tranche of iPath Series B S&P 500 VIX Short-Term Futures ETN (BATS: VXX) on a standalone basis.

I should also point out that next week, the December monthly options expire. Given that the SPY has stalled out a bit, there’s a chance that market makers may begin to sell off the shares they don’t need to cover out-of-the-money options.

That was the same kind of pattern we saw back in March.

And while I don’t think we’ll see anything near as violent this time around, it’s definitely plausible that the week may get a little weird. And if it doesn’t, we’ll adjust.

But in the meantime, it’s not like we need four eyes to see that hedging is still cheap, downside is limited, and the upside is enormous.

This article is supplied courtesy of VentureSociety.com