The Fed, Modern Monetary Theory and the Impact on the US Dollar

In normal times, businesses that need capital offer a reasonable rate of return to individuals or businesses who have capital.

For example, a mining company might issue debt with a 10% coupon to expand their operations. It could hire a broker syndicate to sell those bonds to investors.

Sometimes one party gets the upper hand—but the marketplace usually finds an equilibrium.

Like it or not, governments now play a major role in determining who has access to and who can use capital.

In a sense, they have positioned themselves in the center of the capital allocation chessboard.

There are 4 basic ways for governments to dig an economy out of a hole:

Most economic crises have been caused by credit impacts dealt by the government and central banks. As economies overheat, those in charge raise rates to cool the economy, which is operating above maximum capacity.

Governments and central banks then lower interest rates and increase the money supply to bring the economy back out of the recession and reflate the economy.

For example, during the Great Depression of the 1930s and the Global Financial Crisis (GFC) of 2008…

In the 2008 GFC, central banks really began to exercise their control with the creation of the Toxic Asset Relief Program (TARP). Lehman Brothers, Washington Mutual, and others were allowed to go bankrupt.

But Bank of America and others were deemed “too big to fail.”

Fast forward 11 years, and the US Federal Reserve is supporting most of the US corporate bond market. Through these actions, the Fed has changed the process of how money gets distributed.

This “modern monetary theory” (MMT) is happening across the world, and gold will be a huge benefactor.

Interest rates are already at zero. Government debt levels are at record highs… and the financial crisis isn’t over.

Solving it will require using more elaborate and creative means of economic reflation.

In the next chart you’ll see the amount of stimulus spending by major countries vs the tax revenues they’re bringing in.

You’ll see 2 bars for the US – unsurprisingly the Democrats and the Republicans can’t come to an agreement, so we’ve shown both bars. Either way you look at it, the amount of money being injected into the system is astronomical. 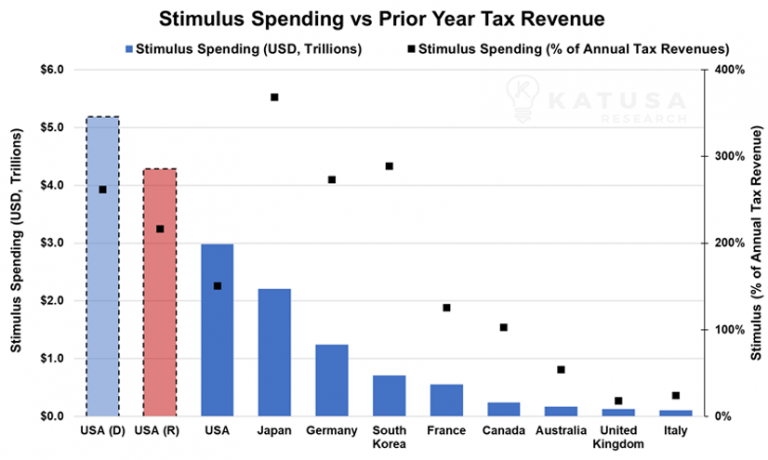 These packages are intended to jump-start the economy through the spending of money and increased employment.

Central banks in the developed world have already cut interest rates to near zero—that’s expansionary monetary policy of the highest degree. 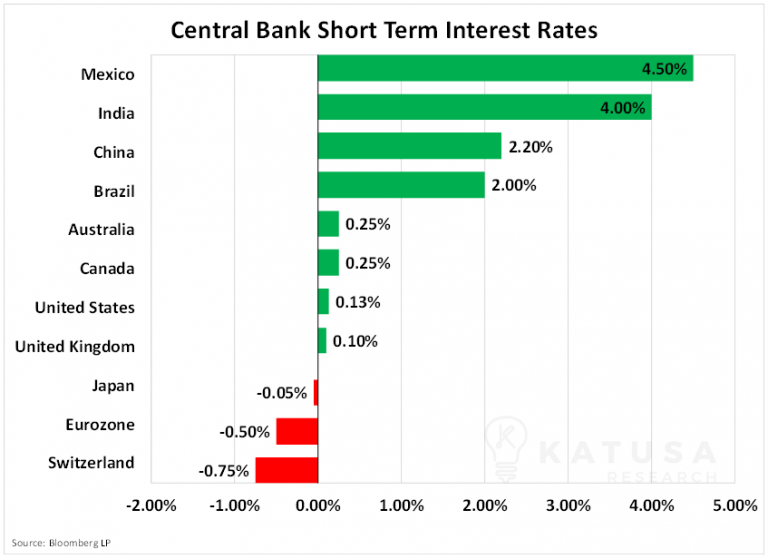 Taking it a step further, central banks have acquired stakes in toxic assets (just like the TARP program of 2008) and bought hundreds of billions worth of bonds (quantitative easing).

Next is a chart that shows the appreciation of assets under US Federal Reserve Banks. You’ll see that the expansion of the Fed Balance sheet in 2020 is nearly 3 times that of the expansion in 2008-2009. 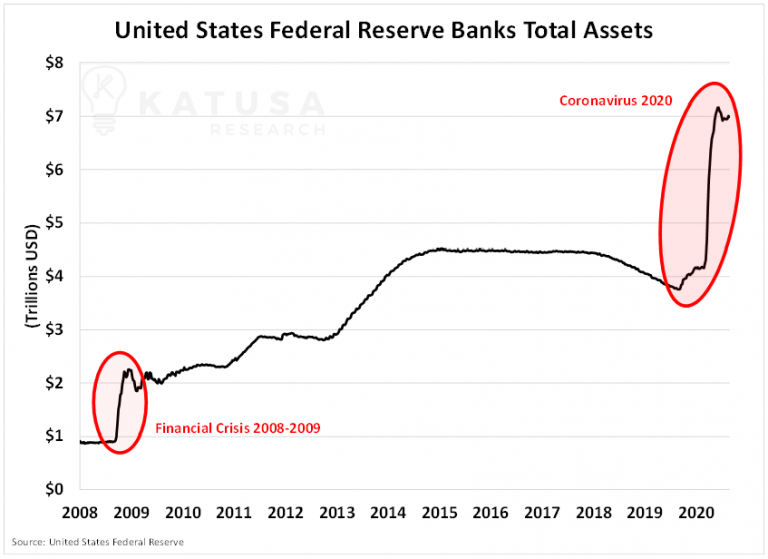 This means governments are propping up the “capital” markets with massive injections of capital.

Governments Will Determine Who is “Too Big to Fail”

And it will either step in during the debt restructuring process or let companies fail.

This is a trend that will only become more common.

Other oil-rich, economically poor nations such as Chad and the Republic of Congo are in similar situations. This will become a major theme for foreign operators in both mining and energy that have operations in -SWAP line nations.

Less endowed countries will not have the ability to continue to print or borrow at will. Printing at will leads to rampant hyperinflation, with Zimbabwe as a classic example.

Borrowing is the only other option, but eventually lenders will refuse to lend against assets that are worth less and less. This leads to currency devaluation.

We have only started to see the beginning of this: coronavirus claimed its first currency devaluation recently…

Again, the requirement of governments to close the gap between expenses and tax receipts is exacerbated by coronavirus. Lower tax revenue requires governments and central banks to print more money to fill that gap.

This is deflationary for domestic currencies.

So Which Door Will Central Banks Open?

The chosen solution is a twist on the playbook from 2008-2009, which consisted of buying assets with printed money to patch the hole in the credit market.

This time, the play is to print money and use the new “printed digits” to patch the hole in lost income.

In 2008-2009, this process was relatively straight forward: figure out how much capital the credit system requires, print it, and keep interest rates low to reflate the economy.

This time around, governments and central banks need to replace the gap in GDP caused by the collapse in output and income losses. This number is relatively straightforward as well.

The question becomes this:

We have begun to see initial unemployment claims fall, and I do expect them to slowly fall further. But it took a decade to get to the employment levels seen in early 2020, pre-COVID.

To get back to that level may not take a decade, but it is not going to happen in a few quarters.

The restart process around the world will be challenging—and perhaps the most challenging in the United States.

If you want to see how I’m positioning my portfolio for Modern Monetary Theory – consider becoming a member of Katusa’s Resource Opportunities.