Early this morning when I sat down to write, I was resigned to talk about how the real economy is faring.

I had some charts lined up to talk about mobility data, retail sales, imports, transportation, and how back to school plans are likely to fare.

But then second quarter GDP revision numbers were released this morning, posting a still-awful -31%.

And that was followed closely by Federal Reserve Chairman Jerome Powell hitting the airwaves and announcing that the Central Bank is going to tolerate “inflation moderately above 2 percent for some time”.

That’s when I about spit coffee all over my screen.

Because as I’ve discussed before, it’s already here… but it’s not something you’ll notice if you look at traditional factors.

So, I scrapped my original topic – the work from which you’ll probably see next week – and set out to once again dig into this one.

Because out of everything that’s happening in markets right now, this is probably the most important.

A Run Through the Banks

First, we need to revisit banking data, because as I wrote before, they aren’t lending at a pace that is genuinely helpful for the economy.

That’s still the case, as total loans and leases declined for the third consecutive week.

And when we look down through the lending components, we see continued declines in commercial and industrial lending, consumer loans, and credit card balances.

That makes some sense, as unemployment rates are still high and we’re still aren’t venturing out that much. In turn, that keeps demand for most goods subdued.

Real estate loans, however, went up for the fourth consecutive week – and not just in residential real estate either. Believe it or not, amid this pandemic and new work-from-home environment, commercial real estate lending picked up as well.

The result of this dynamic has, of course, been rapidly rising real estate prices…

… and lumber prices that have absolutely exploded to all-time highs since May.

Or in other words, inflation.

The easiest way to see that dynamic at play is in bank lending standards, which are clearly rising at an outsized rate in the US compared to other developed economies. 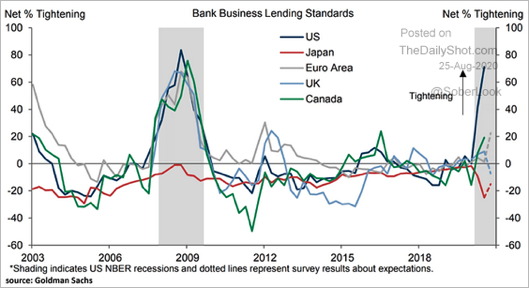 But the problem here is that those at the top of the economy and those at the bottom are still connected via supply chains.

But when you think about that further – just like George Carlin’s “stuff bit – you realize that there are all kinds of other goods that go into home construction other than lumber.

And just look at where this year compares to the previous 29.

But they will occasionally buy a freezer.

And a purchase like that comprises an incredibly significant portion of their income.

Appropriately, It’s Pronounced “Can’t He Own?”

When This brings us to an important concept regarding inflation – when it rips through an economy, the people who are affected first generally also happen to be the people affected least.

But as it progresses, it gets worse and worse, like a circus master’s bullwhip… moving the large part slowly at first, while the smaller parts pick up enough speed to break the sound barrier.

In economics, this concept is called the Cantillon Effect – named for Irish-French economist Richard Cantillon.

In short, it says that any change in relative prices occurs because the change in money supply has a specific injection point and therefore a specific flow path through the economy.

The first recipient of any new supply of money – in this case, wealthy people and corporations – is in the convenient position of being able to spend this money before prices have increased.

But whoever is last in line – in this case, the middle and lower classes – receives their share of this money after prices have increased.

That means the Fed should be monitoring a heck of a lot more prices than the “basket of goods” that comprises the Consumer Price Index.

What that all means to this supply chain analyst is that the Fed and other Central Banks can print all they want, but it won’t result in an increase in demand…especially not at double-digit unemployment.

Worse, when additional fiscal stimulus comes from either Congress or States – and that is already happening – we’re going to see the inflationary results the Fed wants.

Just not in the place that they are looking.

What this means for us, simply is that the natural hedge against inflation – gold – is going to keep going higher. And I’m not even sure I could own enough at this point.

As such, today’s correction is a good opportunity to pick up another ¼ stake in Proshares UltraGold (NYSEArca: UGL), or to begin wading into that market if you’re new to the space.

Because when that inflation crosses over into food, watch out… market conditions will get really dire, really quickly.

And I am genuinely concerned the Fed won’t even see it coming… fingers are crossed.