Yellow Brick Road: The Path Back to the Gold Standard Leads Through China

After an elbow injury forced me to quit playing baseball in college, I unexpectedly found myself with a lot of extra time on my hands.

Some of that time was spoken for. I had started to add in some advanced music classes to my heavy science course-load, and switched my performance focus from classical to jazz.

I’d also opted to become a Resident Assistant that year to offset some of the added cost of being an out-of-state student at an expensive school.

That actually turned out to be one of the best decisions I ever made.

Now, that wasn’t because I was good at being an RA – I was actually pretty bad at it – but rather because of the lifelong friends I wound up making.

And while I can’t remember exactly which of these friends alerted me to it, I do remember the first time as a burgeoning guitar player that I stumbled onto the Usenet newsgroup alt.music.pink-floyd.

The Dark Side of The Rainbow

I kid you not, when I sat down in the Chemistry department’s computer room, fired up newly released web browser Netscape Navigator, and navigated to that webpage, it was like I had walked into a cannabis-induced Cheech & Chong fever dream.

The Pink Floyd album The Division Bell – recorded without founding member Roger Waters – had been released not long before and the band was getting ready to go on tour.

And these fans were going bonkers… not just for the tour, though.

There was some weird conspiracy theory/riddle propagated by someone using the pseudonym “Publius” that consisted of a series of cryptic messages.

Publius refused to reveal their identity, but did intimate that at Pink Floyd’s show in East Rutherford, NJ – at precisely 10:30 P.M. – an enigma would be revealed in flashing white lights. 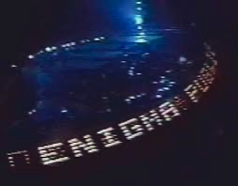 Publius would eventually disappear when the system they used – the Penet Remailer – was shut down due to privacy concerns, and their enigma was never solved. Many years later, during a signing of his book Inside_Out:_A_Personal_History_of_Pink_Floyd, keyboardist Nick Mason would reveal Publius was a concept dreamed up by Columbia Records.

But if you think that was the end of the fever dream, think again.

There was also a ton of chatter on another topic, which also happened to be the reason my friend alerted me to this group in the first place.

And that was the bizarre, unexpected sonic and visual alignment of Pink Floyd’s album Dark Side of the Moon with the movie The Wizard of Oz.

There are a few occasional random, semi-interesting overlaps – like when a character’s dialogue happens to line up with lyrics – but the vast majority of the time, nothing really happens.

Film critic Richard Roeper alludes to this in his book Hollywood Urban Legends, basically saying if the band had dedicated the resources and talent to write such a soundtrack, it would have at least lined up more consistently.

But humans innately look for patterns where there are none, and we do it instinctually. That concept, dubbed synchronicity by psychologist Carl Jung, is the outcropping result of our two modes of thought, and is why we are all susceptible to cognitive bias.

It’s also the technique I’m using to write this article… but more on that later.

That said, there are a couple of genuine “wow” moments.

For instance, when Dorothy first meets the Scarecrow – who if you recall, is in search of a brain – the song “Brain Damage” begins to play.

But it’s the other “wow” moment that has really become iconic.

That’s at the 19:30 mark in the movie, when Dorothy, in black-and-white, opens her front door to reveal a colorized world with a bright yellow brick road…

… and that’s when Pink Floyd’s “Money” begins to play.

From Yellow Bricks to the Yellow Metal to the Red Dragon

The stoner collective’s implication in this very early internet conspiracy theory is, of course, that Pink Floyd purposefully lined this moment up.

I mean, it’s so obvious – the song is called Money, the road is yellow, yellow means gold, and gold means money…

But most people don’t realize that although they in no way lead to Pink Floyd’s true intentions, they’re still valid logical connections.

After all, gold has been used as money throughout written history.

And as I’ve written before, if global currency markets break down, it may very well stage a repeat performance… for some countries sooner than others.

In order for that to happen at scale in this global economic system, it would take one – or several – large actors to shift away from using US dollars to conduct trade.

A few years ago, I wouldn’t have even considered that to be likely. But as tensions – through tariffs and sanctions – have escalated between the US and China, it may now not only be likely… but imminent.

In anticipation of significant US sanctions, China has ordered all domestic banks to use its own financial messaging network for cross-border transactions.

That domestic network, called the Cross-Border Interbank Payment System (CIPS), operates between the mainland, Hong Kong, and Macau, and if used, could serve to reduce exposure of China’s global payments data to the United States.

Chinese officials made this order partly to control the flow of information, but also out of fear the United States will cut them off from the Belgium-based SWIFT system currently in use by the global financial community.

In a report released by the Bank of China International, they imply that if the US were to cut off access to the US Dollar-based settlements, then China should perhaps cease using it altogether.

And while according to the Bank of International Settlements, China has a huge amount of dollar-based debt that it would somehow need to service (chart below), it does have some alternative options available.

For starters, they have been buying up gold reserves on the open market for years. 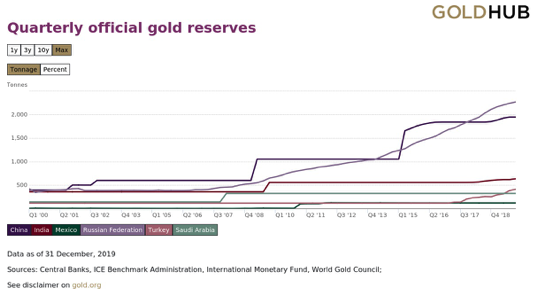 But they also happen to be the world’s largest gold producer… so they could, in effect, establish their own sort of gold standard.

It’s clear that despite the fact that their domestic programs like the Belt and Road Initiative and Made in China 2025 are both incredibly costly, the Chinese clearly think they can finance them.

Because Chinese banks have been on a spending spree, during which the country has funneled more than US$1.3 trillion – mostly from off-balance sheet  Eurodollar shadow funding – into so-called “Special Purpose Bonds”. These are typically infrastructure projects at the provincial and municipal levels. 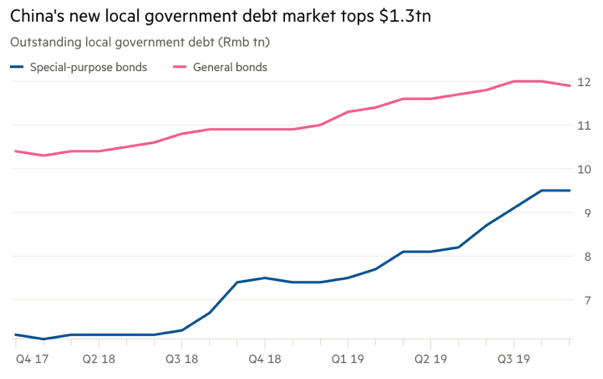 And though we’ve already seen a string of Chinese regional bank failures, they still think they can keep those problems internal.

Heck, they may even think they can fight a war at the same time.

But in any and all circumstances, that massive amount of debt has to be backstopped by something, and all indications are that it’s going to be the yellow metal.

So if you don’t’ yet own a little Proshares Ultra Gold (NYSEArca: UGL), it’s certainly not too late.

Although China may be “On the Run” soon, you’ve still got some “Time”.