The Dethroning of the U.S. Dollar

There used to be 3 things you could be certain of: Death, taxes and the US Dollar as the world’s reserve currency.

But is the US Dollar’s recent weakness the beginning of the end?

Many “YouTube experts”, investors that can fog a mirror and self-proclaimed gurus have jumped on this bandwagon.

But like with cannabis and crypto, most of that crowd plays poker with toothpicks, don’t have a pot to piss in and don’t have a real track record for 2 decades.

To start, let’s take a look at how the US Dollar has performed against a trade weighted basket of other major currencies over the past 15 years. 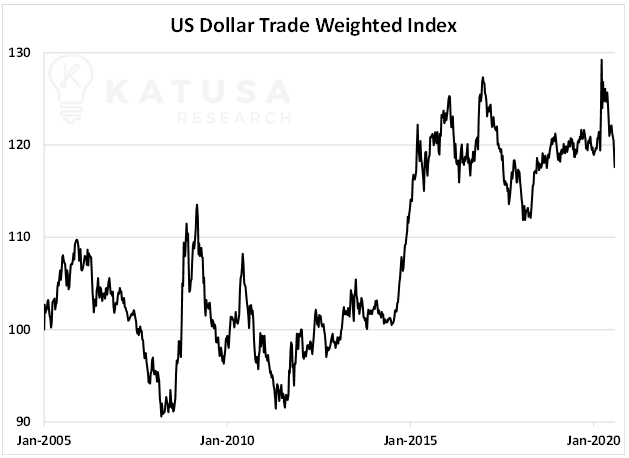 Over the past 15 years, the US Dollar has appreciated roughly 18% versus other major currencies.

During the March meltdown…

As things have slowly normalized, the US Dollar has come back to earth, albeit still up 18% against most currencies over the past 5 years. It is hard to argue that the US Dollar is truly collapsing right now.

The Dollar on the Brink of Disaster?

Do you want to see a chart of a currency collapsing? We have you covered.

Look to virtually any emerging market currency, a handful of which are shown in this chart… 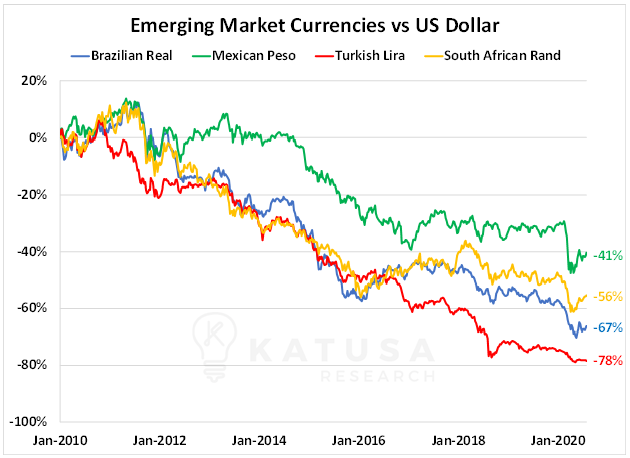 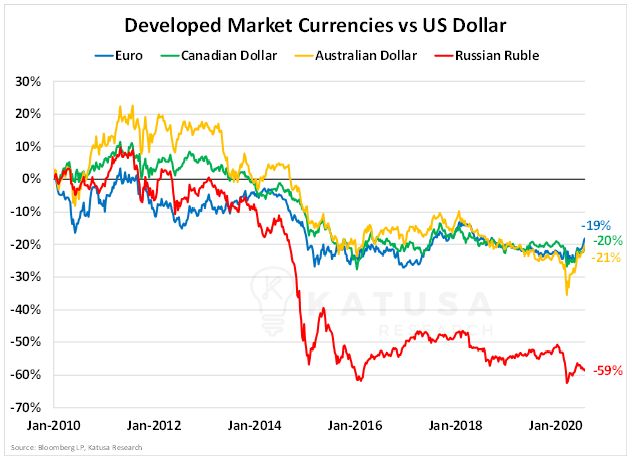 From those charts, it would be hard to argue that the US Dollar is on the brink of disaster.

A core reason for the weakness in virtually every other nation’s currency is that it holds a trade deficit with the United States.

Countries sell more goods to the United States then they purchase from the US. This creates the deficit, which snowballs annually.

It’s widely known that countries like China use their trade surplus to their advantage. They purchase treasuries or US Dollars to boost their reserves which causes the US dollar to appreciate.

This weakens the domestic currency in question and improves the export competitiveness of said nation.

The logic is that the country that runs a trade surplus buys US treasuries with its excess holdings. This will also cause the US deficit to increase even though they are not part of the trade.

It’s the price the US pays for being the world’s reserve currency.

Can any other “reserve” currency claim that?

In a word, financially transmitted diseases.

We’re in a world heading negative and into uncharted territory.

A key reason for the fall in the US Dollar is the negative real rate of return earned on US government notes and bonds.

If the nominal rate is less than the inflation rate, then you have a “negative real rate of return”.

Subtract US inflation and you are left with a negative rate of return.

Don’t believe me? Take a look at this next chart. 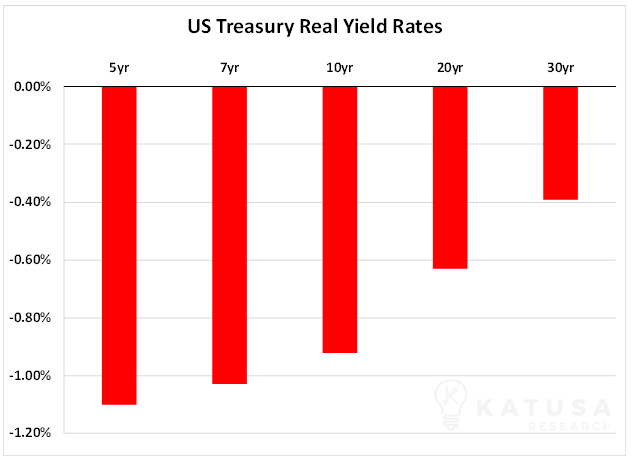 Clearly, a negative return is undesirable, so investors sell the dollar for other assets.

This fall in the US real rates and the US Dollar has coincided perfectly with the recent rise in the gold price.

Below is a chart which shows this relationship between the real rates of return and the gold price. 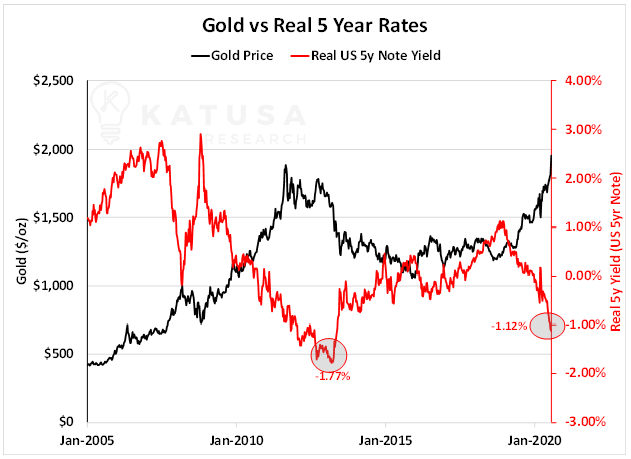 Since the March 24th “whatever it takes” move by the US Federal Reserve nominal and real yields have cratered.

Dollars flooded into the system through expansionary fiscal and monetary measures. And this pushed bond prices up and yields down.

Now, the US Congress is pushing for at least another $1 trillion on top of the $2.8 trillion already injected into the system this year.

Not to be outdone, last week the European Central Bank put together a landmark debt deal worth an additional $877 million.

That brings its total pandemic response to $1.58 trillion, plus an additional $500 billion from national level stimulus packages.

These numbers are mind-boggling.

Let’s not forget about Japan who threw down a whopping $2.2 trillion in stimulus relief.

While the dollar values sound impressive, its more important to understand the size of the package, relative to that of the country or region’s Gross Domestic Product.

Next, you’ll see a chart which compares the United States, China, Japan and the European Union’s stimulus packages as a percentage of 2020 Gross Domestic Product. 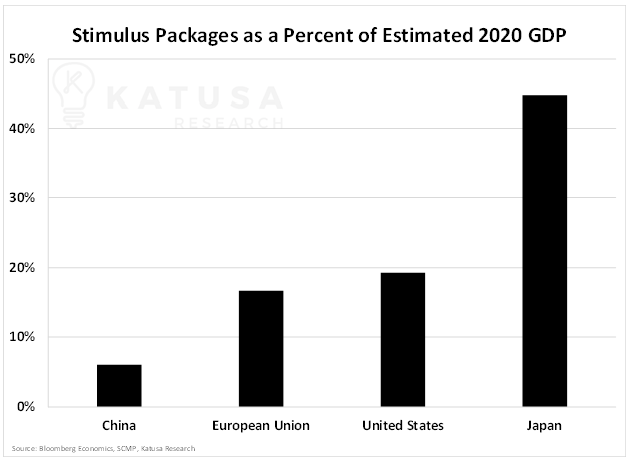 On a total debt basis, things aren’t any better. Below are the 2019 and 2020 projected government debt to GDP levels. 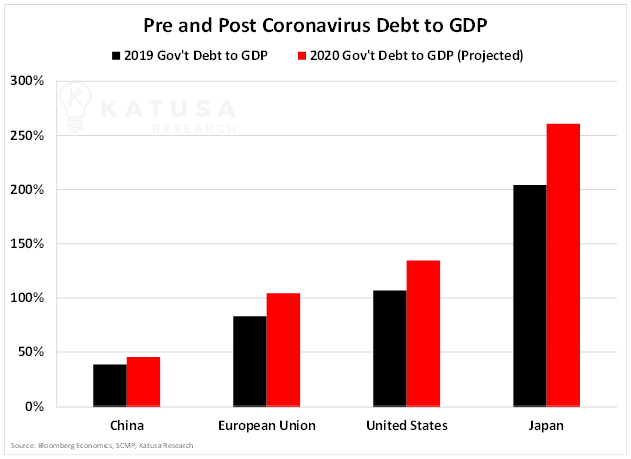 Clearly, the world has a debt problem and it's not going to get any better.

Countries around the world are going to continue to keep interest rates low and jack up fiscal stimulus to spur economic activity.

As currencies devalue, it becomes increasingly more important to hold stores of value for portfolio protection and diversification.

Gold continues to be a top performing asset class this year and gold stocks are on a tear.

Below is a chart which shows the YTD returns of various major asset classes. A humble brag (that’s taken 20 years and a lot of mileage to get to), but the Katusa’s Resource Opportunities portfolio has crushed the competition, up 79% year to date.

With all the excitement about FANG stocks and the NASDAQ hitting new highs, our small group of alligators have seen incredible returns. 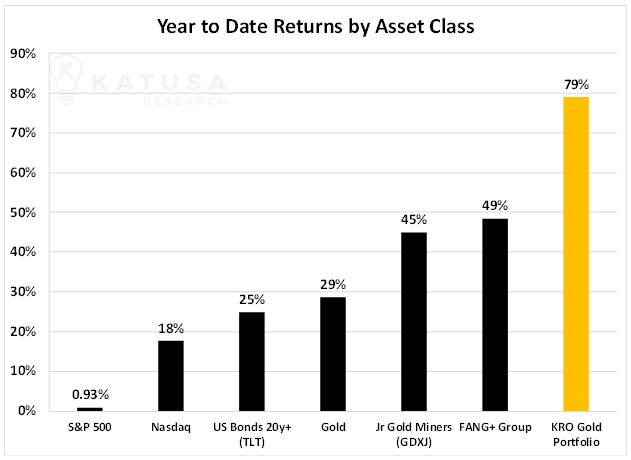 But that’s in the past. What’s next?

I’ve just finished my mandatory 2-week quarantine and I am hitting the ground running.

My team and I have put together an incredible August issue that goes out next Wednesday and it will feature a new company recommendation.

It is a world class asset, backed by incredible people in the United States that I’m almost certain you have never heard of.

Click here to learn more about becoming a subscriber to Katusa Resource Opportunities.

P.S. Nobody in the media is talking about this…

It could be Wall Street’s best-kept secret! This obscure countdown timer has the potential to predict some EXPLOSIVE money moves…

It’s so powerful that Roger Scott had to keep it in an armored truck! Right now -- for a limited time -- he’s taken it out… and he’s about to reveal EVERYTHING!

Join him now before he has to put it back… forever!