Copper: Bold, Hold, Fold or Who Cares it’s Not Gold?

The price of Copper has been on a tear.

There’s an expectation in the markets that the big copper mines in Chile and Peru will be shutting down due to the virus.

Combine that with the market’s belief that the government of China will stimulate their economy and thus buy all the copper they can get their hands on… and the belief is that the strong run in copper prices will continue.

Here’s a chart that shows China’s monthly imports of copper: 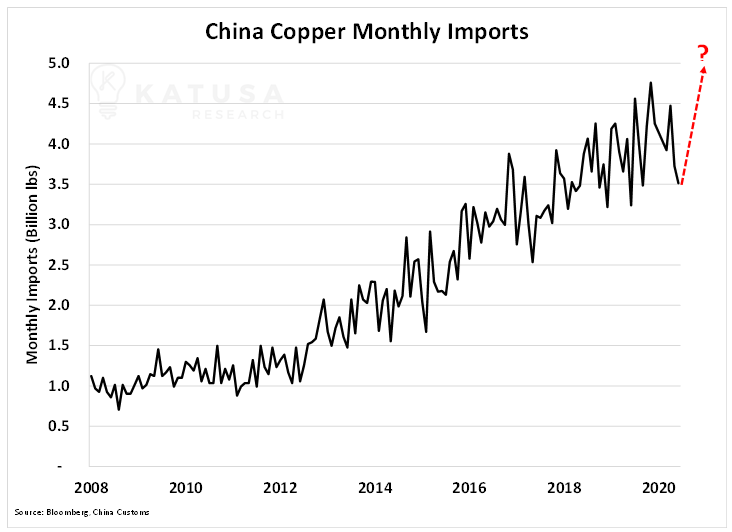 We’ve received a lot of feedback on our long-term stance on commodities, base metals and precious metals – especially when it comes to my +SWAP vs. -SWAP Line Nation thesis.

And the biggest counterargument that we’ve received from management teams, analysts and investors is that:

“The market has already priced in the geopolitical risk.”

We’ve gone through hundreds of examples where analysts are using the same discount rates for projects in both high risk emerging market nations as well as politically stable jurisdictions.

And that’s across all the different stages of the project lifecycle (production, development or exploration stage assets) for precious and base metal commodities.

We can also give many examples where the market is valuing peer comparable assets more highly in risky jurisdictions compared to similar projects in the U.S., Australia or Canada.

The mantra of “go wherever the gold/copper/silver/oil is” has firmly set hold in the resource sector.

But the risks aren’t being discounted correctly in the valuation models.

Let’s first take a look at the recent spike in copper and share prices.

Global (and especially Chinese) economic activity took a nosedive in Q1-2020. That was one of the main drivers behind plummeting copper prices. As expected, the drop in share prices of copper miners was magnified.

China’s swift post-Coronavirus economic recovery and their resumption of industrial activity has led to a strong price movement higher in copper and other industrial metals.

As you can see below, taking Q1 into account, the returns of North American copper producers have been less than stellar on a YTD basis. 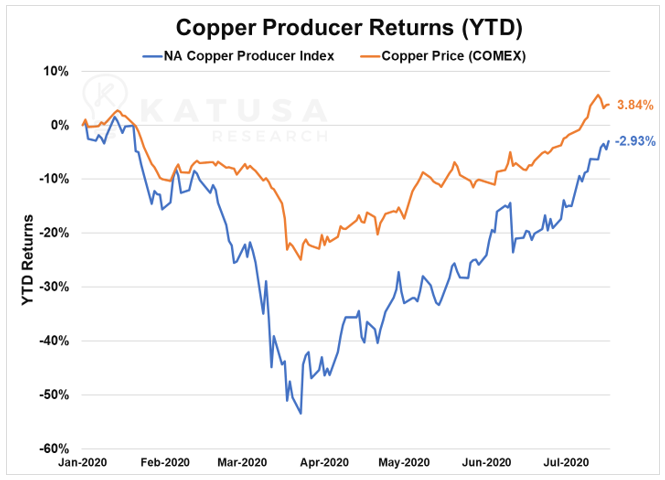 However, Chinese industrial demand has begun to tick up. Look no further than Chinese domestic steel production, shown in the next chart, now at a new all-time high: 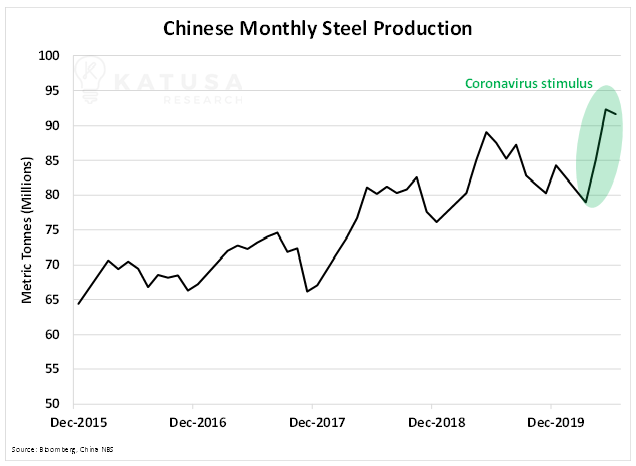 Looking at the North American copper miner returns since their March 23rd, 2020 lows, we see that they’ve far outpaced the returns on not only copper itself, but also the major U.S. and Canadian equity indices.

Their 108.4% return in four months is hard to overlook. In fact, this is 30.5% greater than the return on the NYSE Arca Gold Miner’s Index. 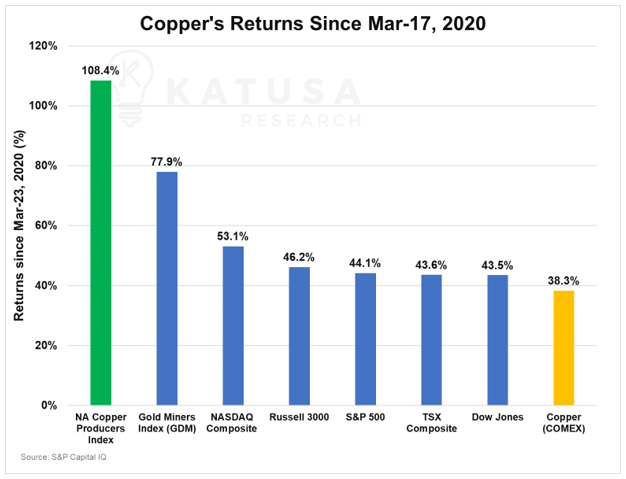 In the futures market for High-Grade Copper Cathode, we can see exactly how bullish speculator sentiment has become. 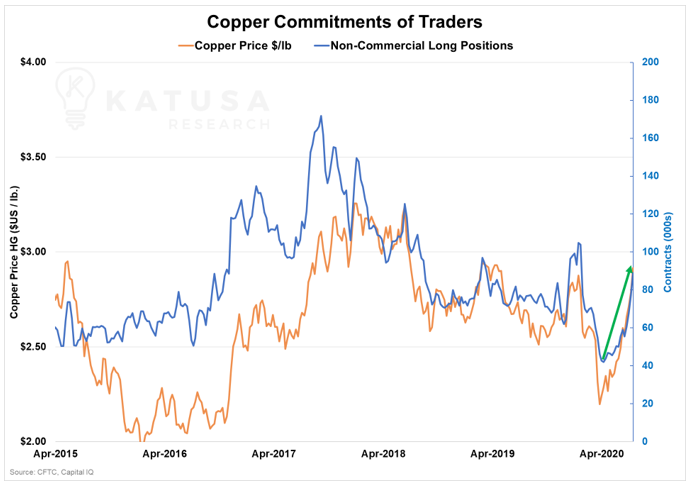 Conversely, spec short positions have fallen by ~31%, or 21,000 contracts during the same time period. 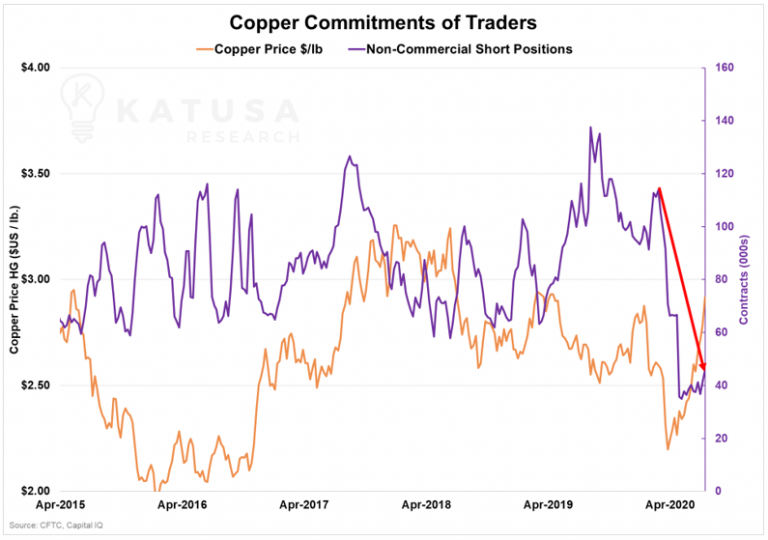 The reason why non-commercial (spec) positions are more closely examined as a sentiment indicator is because commercial traders (i.e. copper producers and their exposed counterparties) usually take the short side of the trade. Simply because their primary goal is to hedge their production for risk management.

Speculators on the other hand have little interest in hedging and want to make money by betting on commodity prices.

If copper continues to catch a tail wind…

You can bet that desperate countries with budget shortfalls will look to “return to the people what’s rightfully theirs.”

“We Will Redistribute Mineral Wealth to the People!”

You can see the tag line that’ll make it happen.

And you must prepare your portfolio accordingly.

Governments will feel the deflationary pressures in their local economies and significant unrest from their people.

There will be pressure to put their citizens first and “redistributing the mineral wealth to the people” will happen in many parts of the world. 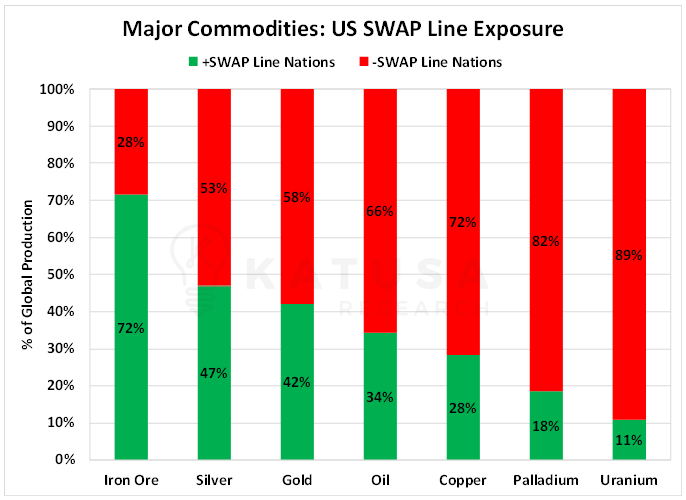 The above chart has a lot of information in one picture.

I do believe this will become a focal issue as the world grows and less developed economies continue to electrify.

Currently Peru and Chile don’t have U.S. swap lines but produce roughly 40% (17.6 billion pounds) of the world’s copper each year.

Both governments are right leaning currently, and pro- mining development and international development.

But we’ve seen video footage of union mining meetings at very large mines in both Peru and Chile that suggest there are some serious issues at the mine sites there.

I wouldn’t be surprised to see the current government parties lose in the federal elections in Peru and Chile in 2021.

Taking this a step further…

This is a dicey situation to say the least. The risk of increased taxes to outright nationalization of large mines is real and will happen.

We can drill down a level further and examine each major copper producer’s exposure to SWAP versus Non-SWAP regions.

In the next chart, you’ll see the amount of red in each company’s production bar is significant. There really isn’t a safe place to put capital to work in any of the top copper producers. 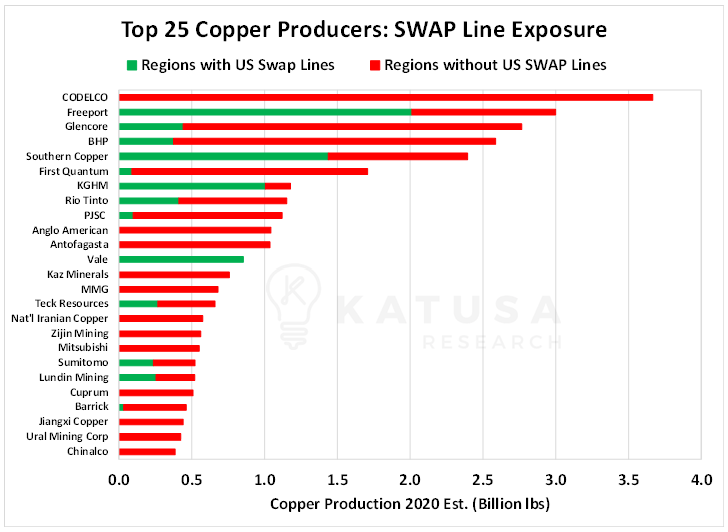 Freeport, the least exposed senior producer, is very interesting and a company that Barrick’s CEO Mark Bristow has said many times it would consider a merger with.

It owns the Grasberg deposit in Indonesia, which is an enormous copper-gold deposit. However, their debt situation is the main reason I’m not currently a shareholder.

Grasberg is a world class operation – it just comes down to whether the Indonesians are now willing to play ball. Or if they’ll revert back to the same nationalistic approach they took with their oil and gas assets.

In the past, the government has already once forced its way into increased ownership of the mine. In addition, the government forced Freeport to build and operate a smelter when it banned the export of copper concentrate.

Even though it’s been stated that Indonesia has been granted SWAP lines from the U.S. Fed, Indonesia isn’t listed in the official U.S. Fed documents we track that get updated weekly.

Thus, from all the government documentation we’ve seen thus far, no funds have actually been lent to the Central Bank of Indonesia from the U.S. Fed via SWAP lines yet.

I have no doubt that there’s much potential for serious economic headwinds which could slow global growth and subsequently copper demand in the near term.

Just to be clear, I’m bullish on copper too.

I’m just also cautious with regards to the potential risks still present in the current macro global economy. And the high valuations many base metal companies are already getting.

We recently put together an alert on a brand-new copper company which many Katusa subscribers received as a dividend from an existing company.

This isn’t new or rare for members of Katusa’s Resource Opportunities.

In fact, it’s the second set of “free shares” my subscribers and I have received from a previous deal, along with free trading warrants.

You can minimize your risk and amplify your upside when markets work in your favor.

If you don’t have the time to spot what companies can offer this in the resource sector, don’t worry.

Consider becoming a subscriber of Katusa’s Resource Opportunities, and you’ll be able to follow exactly what I’m doing.