How You Could Capture a Fortune from the Tech Titans

Have you ever wondered why the majority of Google’s products are free? Or why Facebook doesn’t charge you for a monthly subscription?

It’s simple: YOU are the product.

And your data is the valuable resource they’re after.

The digital trackers they use to grab the information sound harmless enough: “cookies” and “pixels.”

But their purpose is not so innocent.

They record where you go. What you click. How long you spend on websites, and every single little action you take.

They learn your age, sexual preference, location, friends, and hobbies.

They log everything and allow advertisers to use their platform to sell to you based on your data.

You can even request a file with all the info they’ve gathered on you. It usually runs in the hundreds of pages.

It’s quite creepy what—and how much—they know about you. Here’s just a sample…

In the right hands, that personal data is worth far more than you could imagine.

And it’s one reason Facebook’s stock price shot through the roof once they turned on the advertising revenue firehose.

Post-IPO, the stock was around $20. Since they started jacking up the advertising, using data to zero in on users, the stock has risen nearly 1,000%… 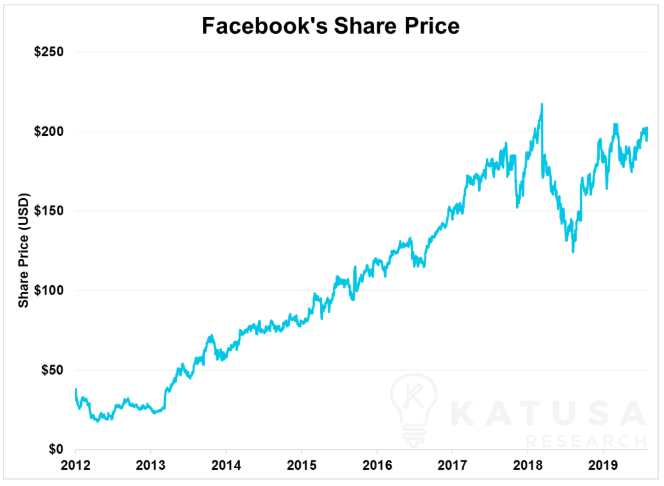 When $5 Billion Is Nothing to You

Not even a $5 billion fine stopped Facebook’s growth.

Usually, when companies have to pay a $5 billion fine, they go bankrupt. But not if that company makes a boatload of money from data.

For Facebook and its “Silicon Don” Mark Zuckerberg, a $5 billion fine was merely an accounting line item. They easily set that amount aside as a potential payout for mishandling their customers’ data.

Facebook stock actually went up when it was reported. Why? Because…

Regardless of the fine, they must continue to be able to use user data.

The Tech Titans – companies like Google, Microsoft, Apple, Facebook, IBM and Amazon, along with hundreds of other businesses, are built on knowing their users and collecting data on them.

You might be wondering why the Tech Titans are so desperate to know what you ate for breakfast or what brand of toilet paper you use.

Here’s why: All of that data lets potential advertisers pinpoint their audience with laser accuracy.

And that’s why digital advertising has grown into a $300 billion industry… and is set to reach $500 billion in just five years.

Unfortunately, the Tech Titans are strong-arming all the little guys and taking the lion’s share of the profit.

But there’s one sector you can invest in that the Tech Titans haven’t completely taken over—yet.

Step Out From the Tech Titans’ Shadow

As the video game industry has become an unstoppable global juggernaut, the Tech Titans have taken notice. They are doing their best to collect their dues in this new sector—or else.

Out of the video game industry’s seven large segments, four are completely controlled by the Tech Titans and their affiliates.

Here are the four sectors firmly under the Tech Titans’ sway:

The fifth sector is currently in a giant turf war…

The Fifth Video Game Sector You Must Understand

The Tech Titans have already staked a large claim in the fifth sector: streaming.

But there’s an ongoing power struggle. The streaming wars have been cutthroat as Google and Amazon wage a no-holds-barred war for territory.

Together, Google’s YouTube platform and Amazon’s Twitch have a 95% share of the lucrative streaming trade. They’ve essentially cornered the market.

But Microsoft is playing hardball. In 2019, they fired a kill shot, going after the crown jewel of Twitch’s empire: Tyler “Ninja” Bevins.

They threw a rumored $50 million dollars at Twitch’s wonder boy, convincing him to stream on Microsoft’s new streaming platform.

Now Facebook, with its own user base in decline, has decided to launch its own streaming platform.

It’s just a matter of which company ends up with the biggest slice of the pie.

Fortunately, on the last two video game frontiers… there is still some pristine land up for the taking.

The Two Frontiers Where Explosive Profits Are Up for Grabs

The good news is that there are two new frontiers in the digital Wild West: esports and digital content.

Any company that manages to make significant inroads in them stands to be bigger than any traditional sports company on the market today.

Katusa Research has identified a unique opportunity with plays in both esports and digital content.

It’s already big enough that the Tech Titans can’t muscle in on its territory.

And it plans on consolidating its power to completely dominate the digital frontier.

This tiny company has positioned itself as the dominant media conglomerate in the highest-growth sector on the planet.

There’s simply no other company in the video game sector that has achieved anything close to what Enthusiast Gaming (EGLX) has done:

In short, the Tech Titans don’t stand a chance

P.S. All the signals are there. There’s a $3 Trillion wealth transfer building up in the markets right now...

Which side of the transfer will you be on? Because we all know that “the rich get richer” and average Joes usually get screwed.

But something’s different this time… Roger Scott and his merry band of MIT scientists have a secret weapon -- call it a “stock market stopwatch” if you will.

You see, this stopwatch patiently watches the markets… and when it picks up the right signals from a stock… (usually the same signals the mainstream media is completely misreading) …