Banking on a Bluff: The Biggest Gold Scam in Modern History

I’m sure you’re well aware, gold has been on a tear and has broken above $1,800 per ounce.

Except for a group of bankers who accidentally got caught up in the greatest modern-day gold racket. For them, their gold bars aren’t worth $1,800 per ounce, but more like $2.75 per pound.

If you’ve watched a lot of western movies, you’ve seen it before…

Before believing that the coin he’s just been handed is truly gold, a cowboy bites into it.

The idea behind this test is that if the coin is truly gold, the pressure of the teeth will leave an impression on the coin.

Over the years, there have been other tests to verify whether gold is truly gold.

Primitive tests relied on scratching the metal or even drilling tiny holes in coins for a glimpse inside. In more modern history, chemical tests and even ultrasounds have been used to make sure gold bars aren’t just plated.

Then and now, people have had the good common sense to try before they trust.

With today’s technology, no one should be getting fooled.

The Kingold Saga: Scam of the Century?

Kingold Jewelry is a NASDAQ-listed company, based in the city of Wuhan (of coronavirus infamy).

The company began as a gold factory and was previously affiliated with the People’s Bank of China.

It grew to become one of China’s largest gold jewelry manufacturers. And boasts both national and international dealings on its website.

According to public records, Kingold began borrowing using gold as collateral in 2013. The company’s debt continued to climb every year. Eventually, Kingold pledged 2.7 million ounces of gold in total, worth about US$4.8 billion today.

Kingold not only offered the gold as collateral, but even had its gold inspected by government certification offices and insured for US$4.3 billion by a state-owned insurance

Suspiciously, all of Kingold’s lenders came from trusts and banks outside its own province of Hubei.

You’d think a billion dollar a year business would have bank accounts set up in its own home region.

How Was the Fraud Discovered?

In late 2019, Kingold failed to repay a debt owed to a creditor, Dongguan Trust.

Like with all collateralized debts gone awry, Dongguan took possession of Kingold’s gold that had been pledged as collateral.

When the Trust went to monetize the gold to cover the loan, they discovered that those bright shiny gold bars were actually copper bars wrapped in gold.

Shocked at the revelation, other creditors began to scramble to check their own collateral.

One-by-one, they found out the gold they held was also copper. They had been fooled by an age-old trick on a massive modern-day scale.

Company chairman Jia Zhihong is a controlling shareholder of the company and former military man. At 59, he’s been described as a bold and intimidating person.

During his time in the military, he served in Wuhan and Guangzhou. And later in life, he managed gold mines owned by the People’s Liberation Army – the armed forces of the People’s Republic of China.

In short, he’s a guy with some serious connections and is not someone you want to offend.

Which Banks Are Exposed to the Kingold Scam?

Is it just a fluke that most of Kingold’s credit came from places outside its home province?

One source in China says it was well known within their home province of Hubei that Kingold was really “KinCopper”.

Local banks and other financial institutions avoided doing business with Kingold. And almost none of them were involved in financing Kingold… though they kept quiet because nobody wanted to offend chairman Jia Zhihong publicly.

Here are the trusts and banks most exposed to Kingold… 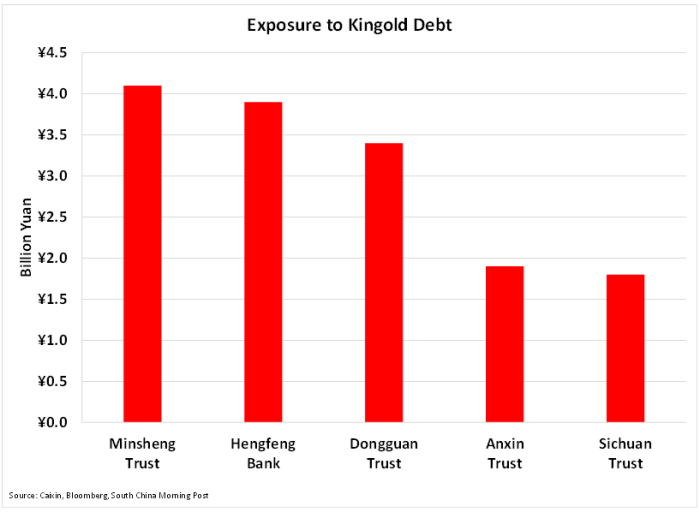 Of course, Kingold took out an insurance policy worth US$4.3 billion on the gold they pledged as collateral, through state-owned PICC Property & Casualty.

It’s the largest non-life insurance company on the Chinese mainland.

Though the pricing on the policy falls a bit short of the full value of the gold, getting back US$1,460 an ounce is still better than getting back $2.75 a pound.

As of early June, two of the above companies, Minsheng Trust and Dongguan Trust, and a smaller creditor named Chang’An Trust filed lawsuits against Kingold. And they asked PICC P&C to cover their losses.

After the fraud was discovered, he has been quoted as saying, “How could it be fake if insurance companies agreed to cover it?”

You have to admit, it’s a really clever way of answering the question.

The red flag should’ve been in how Kingold dealt with Hengfeng Bank, the only commercial bank among Kingold’s creditors.

Access to the pledged gold and testing procedures were controlled by Kingold.

Without a third-party, how could Hengfeng Bank possibly conduct proper due diligence?

Further, the loan officer who wrote the loan at Hengfeng didn’t have the cleanest track record. He was already under investigation in 2018.

Who knows how long Kingold would have gotten away with this deception had they not defaulted on their loan to Dongguan Trust.

But, remember how these financial institutions are trying to go after Kingold’s insurance company, PICC P&C?

As it turns out, getting the money from the insurance to replace the collateral won’t happen without a legal battle.

PICC P&C is arguing that the policies they hold are only to cover collateral losses – accident, theft, and disasters, but NOT fraud.

So how many people are in cahoots here? Surely a few.

The bigger question remains. Is this con a stand-alone crime or is it part of a commonplace scheme?

And the true elephant in the room: how much of China’s gold reserves are “gold plated”?

In 2016, a similar gold fraud case occurred in neighboring Shaanxi province. A US$2.8 million loan backed by gold as collateral turned black… tungsten black, in fact.

When the loan was defaulted on, the financial institution involved, Tongguan Co-Op, found that the bars pledged for that loan were actually only 36.5% gold. Tungsten plate was found underneath the thin gold veneer.

Tongguan Co-op would go on to find 46 tons, or 1.5 million ounces, of fake gold on its balance sheet.

The initial incidence of this single bad loan led to the discovery of fake gold in the coffers of 19 different lenders throughout the Shaanxi and adjacent Henan provinces.

The total amount of compromised collateral was worth US$2.7 billion – the largest gold fraud scandal in China before the Kingold affair.

That’s up to 130 tons of gold compromised between Tongguan and Kingold alone.

Who knows how many other tons of fake gold could be hiding amongst China’s 1,950 tons of gold reserve.

Gold is at an all-time high right now as investors look for a solid footing in insecure times.

But gold is only good if it’s truly good as gold.

Be careful where you purchase your bullion and how you invest.

P.S. We just can’t keep up with these super well-connected traders anymore!

And he does the SAME thing every time… Good thing he’s revealing his secrets soon, we need to find out his strategy!