Honestly, there isn’t a whole lot of news coming through on the various Financial TV networks that I don’t see first somewhere else… usually Twitter or on the Bloomberg Terminal.

That said, I usually have them on in the background when I sit down at the desk in the morning, as they are a decent gauge of daily sentiment, and occasionally they have a moment where they do some solid interviews that grab my attention. 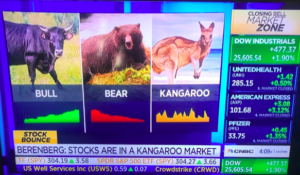 The insanity you see displayed above – pulled off of a mainstream financial news network and not Reddit’s “Wallstreetbets” – is from an interview with Berenberg Capital Markets analyst Jonathan Stubbs, who live on air, declared this market neither “bull” nor “bear… but “kangaroo.”

He’s not wrong, either. Every time there’s some bad news related to COVID-19 outbreaks – like the current one in Arizona – there has almost always been some kind of offsetting “positive news”, like the Fed buying corporate bonds, or this morning’s “positive” retail sales surprise where actual readings blew past expectations.

Don’t get me wrong, it’s great that we beat estimates, and an 18% bump month-on-month is some solid news to see. But people must realize the MoM number is a percent change, not an absolute number.

In comparison, total spending remains down 6.6% year-on-year, and a long, difficult return to pre-COVID spending levels still appears to be ahead.

Moreover, that recovery depends heavily on whether a second wave of infections occur. It is true that in general, we have seen US cases decline steadily from steep peaks in March and April – definitely a positive trend. 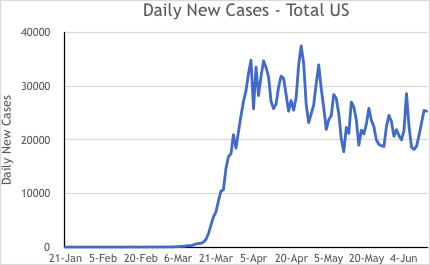 But the chart is a little misleading, in that the bulk of those early cases were concentrated in the New York metropolitan area. When we subtract both New York and New Jersey’s cases from the national total, we get a chart that tells a different story. 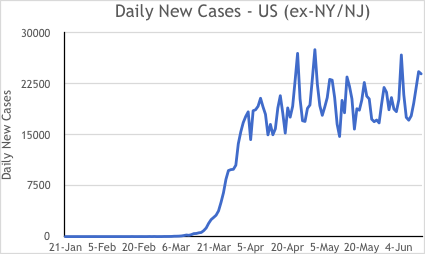 When we remove the noise created by the country’s most dense population centers, we see a daily caseload that is slightly increasing – not decreasing. And although summer temperatures may help keep the spread slow, ongoing protests in New York potentially provide a breeding ground for future outbreaks.

A second wave of infections there would almost certainly derail any meaningful economic recovery and set unemployment back on its previous path. We’re already seeing this play out to a small degree in Beijing… but it’s clearly serious enough for the Chinese Government to take action, as I just received this alert on my Bloomberg Terminal as I’m finishing this writeup.

Bottom line – this battle between COVID bears and Fed/reopening bulls is going to play out in the headlines (or “tape bombs” in trader parlance) for a good long while. And all of us brave enough to participate had better be fully prepared for this “kangaroo market.”

Because kangaroos are jacked… and aggressive… and they can rip your face off, man.

So the only certainty right now is that markets are going to be volatile until we see a vaccine, and central banks hit the pause button on stimulus and quantitative easing.

That brings the CBOE Volatility Index into play, which has thus far perked up a little in June.

It’s still low compared to March peaks, and while it’s unlikely in the near-term that it rises back up to those levels, it is clearly percolating.

The easiest way to play volatility is through the iPath Series B S&P 500 VIX Short-Term Futures ETN (BATS: VXX). It’s currently defending the halfway point of its recent selloff-fueled run, but without an imminent negative economic catalyst it will likely head a little lower from here.

Below the $34 level is probably not a bad spot to stake out an initial entry point, however, as recent lows were only about 10% below that. And if it falls back below the $30 level, it’s a no-brainer to say “G’Day” to this kangaroo.

Because after all, the only thing certain about this market is its uncertainty.

P.S. The U.S. stock market could be entering its second full-blown coronavirus panic as numbers of cases are on the rise...

What you need to do right now to take advantage of this special situation is to keep a level head and remain fearless.

In the midst of all this bad news, we’re starting to see positive signs that the worst could be over for a select group of stocks.

We're talking about insiders and what they’re buying… and there’s one strategy that the world’s most powerful and influential families are using to cash in on these stocks.

To even things up, one infamous trader is about to reveal this never-before-seen system to the public…