However, it is an interest that came much later in life for me. As a touring musician, I spent the bulk of my 20’s seeing the country from behind the wheel of a 16-passenger van, and not so much a 16-cylinder Bugatti Veyron.

So when the Fast & Furious movie franchise was initially released in 2001, I had practically zero interest in seeing it – despite a love of classic car movies (Bullitt, Vanishing Point, Dirty Mary, Crazy Larry) and a consistent semi-annual prodding from my college best friend.

That interest began to perk up a little when I bought my first truly fun car – the ’04 BMW 330 convertible pictured below. Not long thereafter, I switched my commodity focus from coal to iron ore/steel, and as I developed those products, my company started to take on a few major car manufacturers as clients. 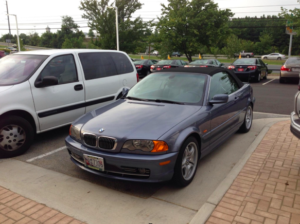 I was hooked… but I was also busy learning a new industry and trying to balance all that work while starting a family. That’s a tall order in and of itself.

So when I finally broke down one night and pulled up the original Fast and Furious movie on Netflix, the first option that popped up on my search was the fifth sequel, I just turned the TV off…

… because my Vin Diesel inventory had surged.

US Diesel Inventories About to Surpass All-Time Highs

I’m not the only one awash in diesel, though.

The US is currently sitting at all-time high storage levels as reopening continues to progress slowly and refiners continue to dump jet fuel (for which demand is still down roughly 80%)  into their diesel cuts.

Yesterday’s release of EIA data showed total diesel inventories sitting at around 176 million barrels, more than 13% above historical norms for this time of year, and matching the all-time highs set in August 2010.

Diesel is primarily consumed by the transport sector – think trains, trucks, barges, and boats – which are of course used to ship products to consumers. And while retail traffic is recovering as reopening progresses  – measured here by the PRODCO North America Retail Traffic Index – there is still clearly a long way to go.

And despite lifting stay-at-home orders and a clear reluctance to resume using public transportation, people still aren’t driving anywhere near as much as they were a year ago. Miami, which showed one of the biggest rebounds in traffic through Memorial Day, has now reverted to previous levels (-60%+ year-on-year) just a couple weeks later. 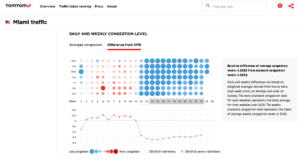 Because of that, gasoline inventories have continued to gradually creep up. And although we’re not yet back to the April peak – not to mention it is driving season – it’s hard to project a big enough demand increase at current unemployment levels that would result in a significant drawdown.

This dynamic – plus oil prices pushing up toward US$40/barrel – have just crushed US refinery margins, which now sit at 15-year lows.

And although the crude oil market got super excited by China’s “return to pre-COVID buying levels” when you look at Asian floating storage data, it’s pretty clear they aren’t using it.

So, between this bearish backdrop in crude oil and at refiners,  yesterday’s gloomy economic outlook from the Federal Reserve, and a potential second wave of COVID-19 infections picking up, there are some old friends we should revisit.

First, with WTI prices starting to show some cracks in the armor this morning, another ¼ tranche of ProShares UltraShort Bloomberg Crude Oil (NYSEArca: SCO) is absolutely appropriate.

Second, all this refined product is going to have to go somewhere, and that is likely to wind up being tankers. With Scorpio Tankers (NYSE: STNG) now falling pre-market, this is too good an opportunity to pass up another ¼ tranche there.

I am also keeping an eye on DHT Holdings (NYSE: DHT) since we’re likely to see an uptick in VLCC rates as refiners cut runs and more crude gets pushed into floating storage. Interestingly, Fidelity took a 10% stake in the company yesterday, so perhaps they’re thinking the same thing.

But other than that, there hasn’t been much interest in the crude tanker market of late, so I think there’s time to evaluate options.

And besides, I have a movie to watch…

P.S. For the first time in history, three millionaire traders under the age of 50 expose on camera the power of their “New Money Monitor”...

All in just SEVEN days or less.

See for yourself inside this secret meeting.