The Central Bank created cash around the world has propped up major stock markets and indices like the NASDAQ, DJIA and S&P 500.

This creates a stark distinction between a “V recovery” in the stock market and the harsh reality of the real economy.

Double-digit unemployment rates, negative GDP across the globe, interest rates near, at or below zero…

NONE of the economic indicators point to the underlying economy being healthy.

Imagine your body projecting the epitome of health on the outside. Everyone sees your fancy clothes, exotic car, and million-dollar smile.

But your internal vitals are about to shut down. Your cholesterol is high, arteries are blocked, blood pressure is high, and your kidneys are failing.

The market looks good, but the internal reality is not.

That’s the dichotomy you’re seeing right now in the markets.

I’ve never seen a greater difference between the stock market and the economy than what we’re witnessing right now.

And in uncertain times, gold gets attention.

Gold has consolidated in its upper ranges. Since May 1st, gold has only closed below $1,700 3 times. This is positive consolidation for a stronger base.

I personally believe it’ll take more time to consolidate before there’s a break higher. I’m also not ruling out the possibility of another “sell everything” type event happening within the next 3 to 12 months.

Why Is the U.S. Dollar “Collapsing”?

First off, it’s not collapsing. But that’s the narrative many want to believe.

This week there was selling pressure on the U.S. dollar.

Below is a chart which shows the U.S. dollar breaking down against major currency pairs. 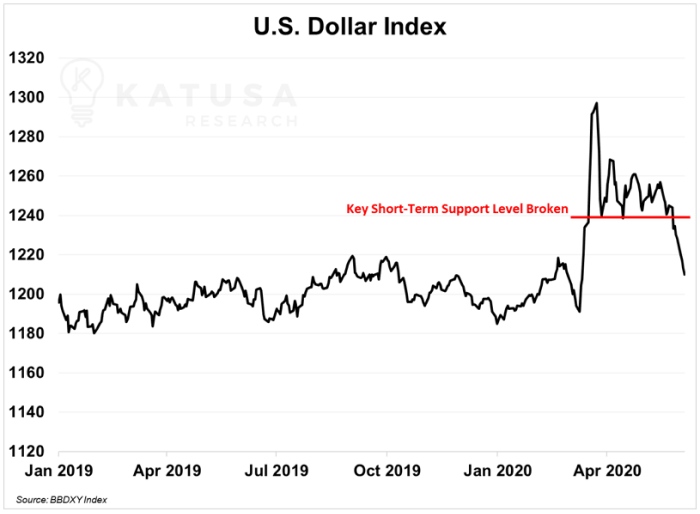 What’s the Impact of the U.S. Dollar Falling?

Many may view this as a positive for global growth and improving economic conditions. I believe that there are other issues at play beneath the surface. These tell me the economic internals aren’t functioning as they should.

The 3 most important letters in the market today are YCC: Yield Curve Control.

The key difference between QE and YCC is that QE deals in quantities of bonds, whereas YCC focuses on bond prices.

The reason is, if the bank fails to keep bond prices at the specified target level, the whole house of cards collapses.

The Federal Reserve has injected trillions of dollars into the system. This pushed down the yields of short-term bonds and caused long-term rates to spike.

Below is a chart showing this phenomenon. You’ll see the spread between U.S. 30-year bonds and the U.S. 5-year note hit a three-year high this week. 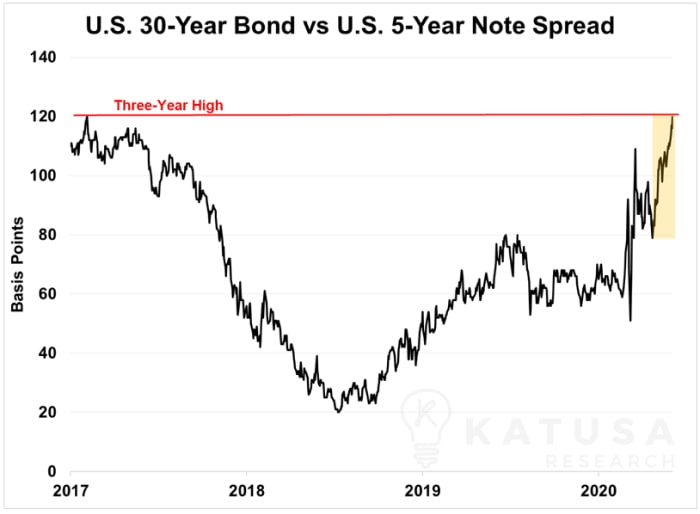 The steepening of the yield curve in a healthy market is commonly a sign of improving growth and an increased appetite for risk on assets.

The problem is, right now we have anything but a healthy economy.

This week, Christine Lagarde and the European Central Bank injected an additional €675 billion into the system, bringing total injections to €1.35 trillion. Eurozone GDP is forecast to be down 8.7% for the year.

In the United States, several trillion dollars have been injected and there are rumours of another $1 trillion in the pipeline. U.S. GDP is forecast to contract by approximately 5%.

China abandoned a GDP target for the year entirely.

What about other major players, you ask?

Below is a chart which shows the estimates of 2020 GDP growth for major nations. 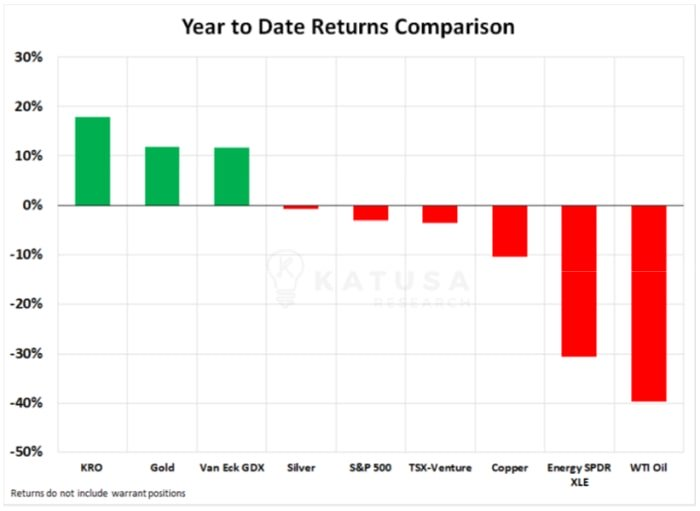 Given the amount of red in that chart, it’s hard to argue that the global economy is healthy and functioning well.

What does a steep Yield Curve and weak economic growth signal?

Weak GDP growth, high unemployment and rising long-term rates point towards deflation and then stagflation. This is not good. Again, when the insolvency crisis hits, it will be USD that the world rushes into once again.

How Do You Prepare for Deflation?

First, in a deflation – financially speaking, debt is the worst thing to have. Cash flows drop, and so cash is king. Everyone loses in deflation, but those who are able to preserve their wealth and lose the least win.

How Do You Prepare for Stagflation?

This is when it gets very ugly for the everyday person in society. People forget that even though the stock market dropped 85% from its 1930 peak over the next two years, the great depression lasted another decade.

Think of stagflation as higher prices for everyday survival goods (food, energy, shelter, clothes) but coupled with high unemployment with no economic growth.

Historically speaking, gold and the U.S. dollar were opposites. When one was up, the other went down.

But in this new world of Quantum Economics, we’ll see a strong dollar and strong gold prices at the same time.

China has shown very clearly that they’re not ready to be the world’s reserve currency yet. Perhaps even more so by creating their own “digital currency”.

Eventually, governments around the world will try to solve this incredible debt problem by introducing digital currencies.

China has already floated the idea, but are you, the U.S. government, the ECB, and international businesses going to subject themselves to using a digital currency controlled by a communist government?

There’s a long way to go before international acceptance of digital currencies. And before then, it’s what you do financially that will position yourself and your family’s financial destiny.

If you look at growth around the world, where do you see strength?

China? Yes, if you believe their numbers – but even going off their own numbers, it’s weak compared to where they were at before.

The United States? Don’t count out the U.S. Right now things are very bad in the U.S., but the U.S. has always done its best when they had their backs against the wall.

What has any central bank done globally done over the last three to five years to replace the U.S. dollar as the global reserve currency? Nothing is the real answer.

I hold a large percentage of my cash in USD (and not in my home currency of Canadian Dollars).

There will be incredible opportunities to leverage a rising USD to buy assets in foreign currencies (as we saw in the March and April bloodbath).

My subscribers to Katusa’s Resource Opportunities have seen many of their positions take flight.

One of our most recent gold recommendations is up 89% in 2 months.

My largest current core position – a precious metal producer – is up 102% over our portfolio cost base. Just to catch up to its peers, at today’s gold prices over $1,700, this stock could easily trade 50-75% higher.

One of our core gold takeover targets is up 229% (and I expect it to ride higher on positive drill results).

Below is the year-to-date (YTD) performance of the Katusa’s Resource Opportunities newsletter (KRO) portfolio. And like our returns since inception, we don’t include warrants from several financings that are in the money. Every position, including the losers, have been properly accounted for.

The reason I show this is not to brag. It’s to demonstrate to new subscribers that although it can be frustrating at times and requires significant patience, our alligator style of investing works.

We’re not a day trading strategy. We look for the absolute best management teams with top assets and look for strategic entry points.

I’m very excited about our portfolio positions moving forward and the opportunities just above the horizon.

Is your chance to buy some of the best precious metals companies over? No.

If or when a pullback happens, you want to have your hit list ready. And now is the time to do all your homework on the best opportunities. That’s where Katusa’s Resource Opportunities can help in your decision making.

P.S. For the first time in history, three millionaire traders under the age of 50 expose on camera the power of their “New Money Monitor”...

All in just SEVEN days or less.

See for yourself inside this secret meeting.