I’ve been writing for a few weeks now about the genuine changes in consumer behavior that are taking place around the world as governments respond to COVID-19.

Basically, the thesis has been that because of massive layoffs and increased remote working, consumers are spending far less than they ever have been during this last bull market.

And presumably, they’re stockpiling cash – whether it be boosted unemployment compensation, stimulus checks, or salary – in case another outbreak/lockdown happens in the future.

Well, just in case you needed any further proof of changes in consumer behavior, I present to you today’s release of personal spending data for the month of April, compared to the data point’s entire history:

Now, let’s compare that to the corresponding, just-released consumer savings rate for the same time period: 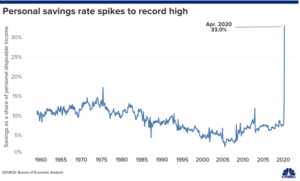 I would venture to say that paints a clear picture. But the next level of analysis now must be – “what weren’t we buying?”

Well, based on shipping data, we weren’t buying much “stuff” – intermodal imports into California ports peaked in 2018, declined as the trade war escalated, and absolutely tanked in March as the China lockdown affected supply, and the US lockdown affected demand.

We weren’t taking public transportation because most businesses were shut down. Data collected by Moovit reflects this very clearly. 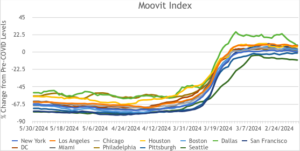 We certainly weren’t buying gasoline for our cars either, as we were either working from home… or not working at all.

And even though demand has recovered a bit as states have opened, we remain at the lowest levels I have ever seen in my professional career.

We stopped flying altogether, and we haven’t really started back up at all.

And if Homebase’s time tracking data for hourly employees – the bulk of US job losses so far – don’t show a material improvement from its current -34% year-on-year change, we’re probably aren’t likely to see significant improvements in consumer spending at all.

Those who can have been spending on tech and connectivity, home improvements, gardening (yours truly is guilty as charged on all three), and I wrote recently about the correlated trend in new pickup truck purchases.

But as states open – and unemployment proves sticky – that spending is likely to plateau or perhaps even decline.

To that end, we’ve seen a nice 15-20% gain in our stake in Ford (NYSE:F) in just two weeks. Since most of the consumer discretionary sector is beginning to look like it’s putting in a top, I think selling here makes sense.

Plus, we want to have some dry powder to deploy in case geopolitical tensions with China meaningfully increase – which looks likely at this point.

If that happens, we will likely add to ProShares UltraShort Bloomberg Crude Oil (NYSEArca:SCO), as that will negatively affect oil demand.

China has been one of the biggest buyers of oil recently, but I find that statistic to be misleading. After all, they essentially bought nothing earlier in the year, and oil prices are historically low at the moment.

If their economy flags at all – which almost certainly would if Hong Kong’s special status is revoked – then there’s plenty of downside from here.

But for now, as the clearly serious and esteemed thought leader David Burd once put it, $ave Dat Money.

P.S. How does the thought of locking-in automatic deposits every seven days sound to you?

Soon you’ll be able to access a brand-new method to earn weekly paydays from the market that are worth $3k (or more).

Lance Ippolito is revealing the strategy that allows the little guy to cash in on certain stocks… just like the big banks do!

With just two clicks and five minutes a week (or even less), you could get thousands deposited into your account every seven days.

Get the trades here.