Trump vs. Powell: Who Wins?

President Trump recently tweeted, “As long as other countries are receiving the benefit of Negative Rates, the USA should also accept the ‘GIFT’. Big numbers!”

Considering the President is a real estate marketing guru facing a ballooning national debt, it can’t come as a surprise he’d be in favor of Negative Interest Rate Policy (NIRP).

But are they really a gift?

Negative rates are supposed to incentivize spending, in theory.

But as I said last year, the opposite ends up happening.

The theory is that negative interest rates create a situation where the depositor should spend rather than save. But is that really the case?

Look to places such as Japan and Europe where negative rates are already in place and ask their banks how their banking and lending climate is.

Many forget the sneaky Swiss recession in the 1970s. Swiss banks charged interest rates on deposits of negative 8.24% annually in efforts to stem the soaring Swiss Franc.

The rise of the Franc crushed the competitiveness of Swiss exports while domestic industrial production cratered. It was dark times for the Swiss and the economy fell into an ugly recession.

Switzerland spent nearly a decade in a negative interest rate environment. As history shows us, NIRP isn’t the magic bullet that Trump thinks it is.

Will the U.S. Federal Reserve Use Negative Interest Rates?

This past week, the Federal Funds Futures rate traded above 100, signaling some traders were positioning for the possibility of negative rates. The chart below shows this positioning on May 8th.

Federal Reserve Chairman Jerome Powell effectively slammed the door on this possibility this past Tuesday.

He stated that the Fed likes their current toolkit and that negative rates is not a viable option.

While negative rates may be off the table for now according to Powell, additional fiscal and monetary policy measures certainly aren’t.

The Federal Reserve has cut rates by 150 basis points, with the effective federal funds rate now sitting at zero.

Not to be outdone, the U.S. House of Representatives passed a $2.9 trillion aid package, the largest in U.S. history. Greenbacks are being printed like never before and this is a trend I expect to continue.

During all this, the U.S. unemployment rate has skyrocketed past early 1980s recession levels.

What’s the U.S. Unemployment Rate At?

At last print, the U.S. unemployment rate was 14.7%. That’s the highest since World War II. 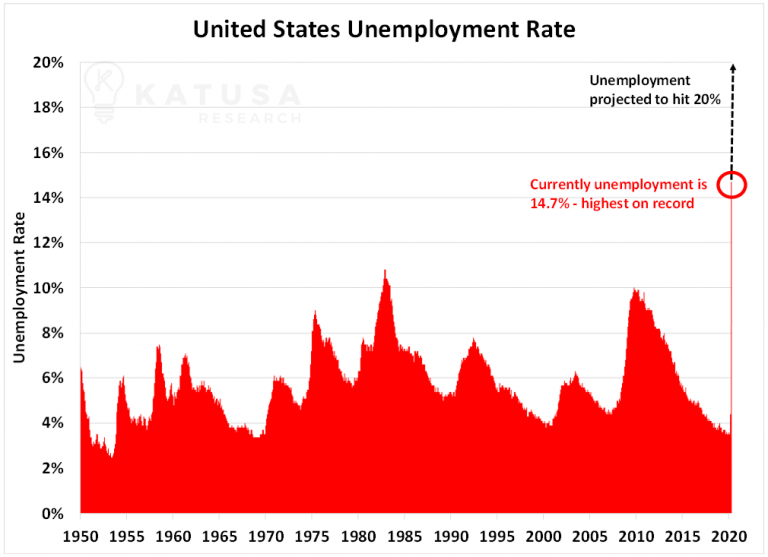 According to the U.S. Federal Reserve…

This is truly a horrible statistic and one that’s likely to get worse before it gets better.

Jobless claims continue to be filed and the May unemployment rate will likely be 20% or higher. These record unemployment levels will further slow the velocity of capital throughout the economic marketplace.

In response, the Fed and the U.S. government must push against the string and continue to plow cheap money into the economy.

I believe we’re now well into the zone of diminishing marginal returns, where each new $1 injected by the Central Bank or Government today will have less of an impact than the previous $1.

What’s the Impact of Stimulus on the Stock Market and U.S. Dollar?

At the end of the day, as a professional investor and fund manager, it’s about making money with the best risk-reward possible.

Below is a chart which shows this year’s market crash against other major historical corrections in the Dow Jones Industrial Average. We’ve had the most rapid descent ever seen in history.

Then, thanks to the “anything it takes” coordinated central bank policies, we had one of the fastest and largest rebounds ever… 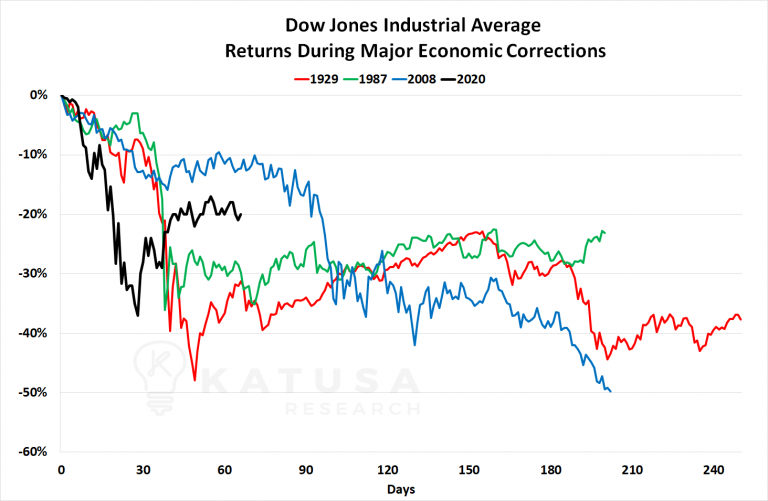 Just because the bounce was swift doesn’t mean we’re out of the woods just yet. In fact, I think the odds are high that we probably topped out last week in the S&P 500.

While I tend to agree, the major indices are not my focus.

I strongly believe that the U.S. dollar will remain the world’s reserve currency and retain its store of value against other major currencies.

Look no further than the dependence upon the U.S. Federal Reserve to create SWAP lines of U.S. dollars for other central banks.

You could argue that demand for U.S. dollars has never been higher. And I don’t see this changing any time soon.

I think more and more nations will be forced to choose between being an ally of the U.S. or not.

Those who become allies will receive access to U.S. dollar SWAP lines.

And for those that downplay the SWAP lines, just remember who the SWAP-er and who the SWAP-ees are in global Central Bank relationships.

For all the U.S. dollar haters out there…

I just want to remind everyone of an often-overlooked fact…

I hear so many arguments state that the beginning of the end for the U.S. Dollar was in 1971 when President Nixon closed the gold window. I won’t argue that the move was detrimental.

And as most know, I’m very bullish on gold – even though I think we’ll still get some price selloffs along the way to $2,000 gold.

But I just want to remind everyone that Great Britain closed the gold window in 1931, 40 years before the U.S.

One month later, Canada followed suit in October 1931. By the end of 1931, Japan also ended the gold backing of their currency.

Germany had Great Britain beat by eight years and closed their gold window in 1923.

And China? The Chinese currency was never actually backed by gold.

So as bad as you think Nixon’s move was, just think about how much longer the U.S. Dollar was backed by gold when compared to other nations.

I continue to believe that gold will do well, even if the U.S. Dollar remains strong.

It’s been a key investment thesis for my funds and subscribers since last year. Dubbed Quantum Economics, you can learn all about it here.

Markets Are Rolling Over – Where Are the Profits?

Today, I’m 100% focused on sectors that offer incredible opportunities at the right price.

The precious metals sector has been on a tear.

Did you know gold is up 13% year to date, while many producers are up 25% or more? Compared to the Dow Jones Industrial Average which is down 18%, that’s a phenomenal difference.

It’s a unique business model with an incredible “moat” around it. And it’s very close to my first tranche buy target.

We’ve stayed extremely disciplined with our buys in the Katusa’s Resource Opportunities portfolio. The portfolio has seen some incredible returns on recent picks.

Even though precious metals and uranium stocks have been on a tear recently, now’s not the time for complacency. In fact, I missed a 100% move in a silver play by mere pennies. It happens, but I maintain my disciplined approach of waiting for stocks to go down to the prices that I’m willing to pay for them.

The market can turn on a dime, and you must be prepared with cash to take advantage of any more corrections or fund redemptions.

It’s this type of unique thinking that’s the Katusa advantage.

Right now, I am laser-focused, cashed up, and ready to put millions of my own money on the line. It’s in this type of chaos that I make my biggest and best investments. Fortune favors the bold.

We have some very exciting material in the pipeline – and if you’re interested click here to learn how to access my premium research and top resource ideas.