Pick Me Up: Riding This Economy Into the Great Unknown

It seems that every week, we get round after round of economic data, and it’s all… well, it’s terrible.

Yesterday was no exception, either, with initial unemployment claims clocking in at nearly 3 million people over the course of last week. 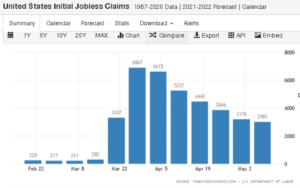 While that’s down by almost 50% since the late March peak, it wasn’t a significant decline from the previous week (~6.5%), and it remains more than 10x higher than pre-coronavirus levels.

Let me be frank – I am not particularly positive on the country’s overall economic outlook going forward.

Even as economies have reopened, it hasn’t necessarily been a success. I mentioned last week that Georgia’s reopening spelled continuing bad news for retailers and restaurants, whose costs just rose but whose revenue did not.

And Atlanta traffic data indicates that weekly gains are leveling off at around 25% of normal levels.

And with Florida opening up this week, we see much of the same story – decent week-on-week gains, but total traffic levels still 35-50% lower than a year ago.

So, if we are to try and look for a bright spot amidst all this doom, gloom, and uncertainty, we have to figure out what people are doing well, and what they are buying.

In March, job losses were concentrated in the service sector, with more than 5 out of every 6 coming from the hospitality, leisure, and retail trades. 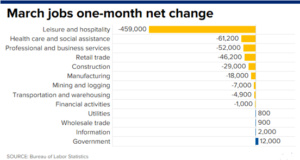 And when we look at April, it doesn’t appear to be that much different – leisure and hospitality actually got worse, having lost almost half of its jobs over the previous 30 days… which is just heartbreaking. 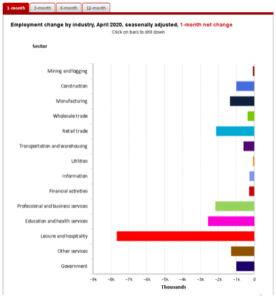 But as bad as things are, higher paying white collar jobs have actually held up pretty well, with professional and business services jobs only down 9% year on year, and the financial, information, and utility sectors all barely registering declines.

Now, I think that is going to worsen over time, but a lot of these jobs are sticky – cutting back on them would also cut back on productivity and have an impact on top-line revenue. So, if anybody is going to drive consumer behavior over the next 6-12 months, it’s this crowd.

And I’d like to think I know a little about the purchases this demographic is considering at the moment… because I’m one of them.

We all still have worries of course, but the one thing we’re all very concerned about is the food supply chain – so much, in fact, that almost all of us have used our newfound time at home to build vegetable gardens over the past month.

And roughly about 10-15% of this same group of people have made at least one major purchase over the past 60 days.

They traded in their car to buy a pickup truck.

And indeed, they aren’t the only ones with that idea – auto sales in general have been more resilient than expected, even with dealerships mostly considered non-essential businesses until recently.

So while subprime lending for car loans continues to be an issue – a serious headwind for an auto finance company like Credit Acceptance Corp (NYSE:CACC) – the buyers with stable jobs and better credit ratings are still good to go.

And while some of those people are delaying purchases to some degree, the uncertainty around when they would buy a new vehicle largely seems to be going away according to Cox Automotive. 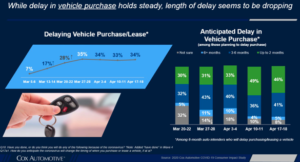 In fact, with the right incentive – 0% interest, delayed payments, no money down, etc. – dealers might just be able to pull some of these purchases forward.

And so many of them are going to be pickup trucks that dealers are already anticipating a shortage.

That encouraged me to do a couple of things.

First, I wanted to look at the overall financial health of the industry, and project forward the worst-case scenario – one where consumers stay home indefinitely.

To do that, I held anticipated loss levels and CAPEX guidance steady, and brought in any debt coming due on a quarterly basis. Then, I subtracted that loss from the company’s available cash position.

The results were pretty interesting. If conditions stayed exactly the same, Fiat Chrysler (NYSE: FCAU) would run out of money in Q1 – a timeframe in which we are unlikely to have a coronavirus vaccine.

Ford (NYSE:F) and GM (NYSE:GM), however,  have more than enough liquidity to last them through Q4 of next year without worry. That’s a long enough lead time for both a potential COVID treatment, and for consumer behavior to begin improving.

So, the question essentially comes down to… who sells more trucks?

The answer is probably intuitive. In fact, every new pickup purchased in my neighborhood was by far the most popular pickup in America… 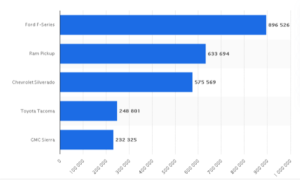 It’s a pretty straightforward value proposition for me here… below the $5/share level, Ford is a steal that could more than double your money within 5 years.

As I’ve said, however, I think markets are going to have another rough patch over the next few months, so I would recommend putting in no more than ¼ of any intended stake right now, and averaging down over time.

Keep in mind that during the last financial crisis, shares traded as low as $1.01/share.

In fact, it’s probably the biggest regret of my investing career that I didn’t just back up the truck and load up on a sure thing that would have made me almost 19x my money in a little over 2 years.

So, rest assured that this time around, I fully intend to ride this pickup off into the great economic unknown.