Interest in gold and gold stocks has skyrocketed in the last 2 weeks. And for good reason.

Gold surged from $1,470 during the peak of the March Meltdown to over $1,750 this week. Gold is getting hot again.

Stockbrokers that were all cannabis and blockchain oriented the last few years are now calling their clients about the next “hot” junior gold stock.

“Get in now before the exploration this spring and summer.”

And bankers are lining up the next big financings to fill their institutional clients with.

Searches for gold stocks are up sharply and the newsletter crowd will follow shortly.

My red flags are going up.

In the long run, I’m very bullish on gold. But like all commodities, it’s very cyclical.

But Marin, gold is money!

Yes, true – but most junior exploration companies have no gold.

And I have a very different take on what’s going to happen (which I alerted subscribers to last week).

So far, it’s unfolding like I thought it would. But from here on out there are 2 scenarios that could happen over the coming weeks and months.

In either unfolding scenario, we are prepared to act.

For those new to the program (and those catching up), let’s take a look at how gold does during bad market conditions.

This is a chart of the S&P 500’s largest declines in the past forty years. And it shows gold’s performance in the same time frame.

First, you’ll see that glaring decline in the price of gold in the early ‘80s.

Gold had just come off its best decade ever, with a 2,300% increase. The cool-off period had to come.

But you’ll also notice that the length of the decline doesn’t matter. Gold nearly inevitably rises—at least a little—whether the recession lasts a few months or a few years.

Your city is destroyed. Suddenly, everyone you know wants earthquake insurance too.

After such devastation, banks may require multi-dwelling buildings to have earthquake insurance as part of the mortgage.

Right now, it’s too late. Gold prices are too high, and dropping stock prices are closing in fast.

Every week the Commitment of Traders report comes out. It details what positions the large speculators and the commercial side are taking.

It’s another tool you can use to make your own bets in the sector.

In the chart below you’ll see the non-commercial long positions in gold. You’ll notice that these traders are reducing their net longs in gold (which was at a 10-year high recently). 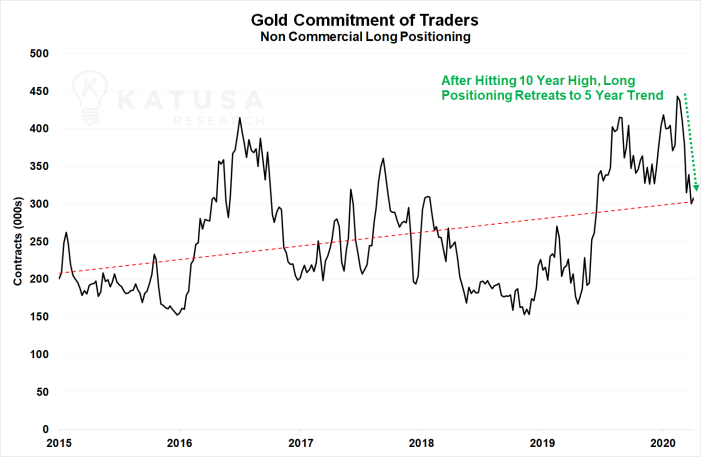 On the way down from the 10-year high in long contracts, however, it found some support around the 5-year trend line. This indicates that traders aren’t quite ready to let go of their safe haven long gold positions just yet.

This is an important point for gold, and we are watching this closely.

Maybe we’ll get another chance to add to our gold stock holdings in the portfolio yet.

In the next chart, let’s look at the short positions of the large speculators…

Large speculators’ short positions in gold are at 5-year lows. Meanwhile, the gold price is at 5-year highs. Is there a rapid reversal coming? 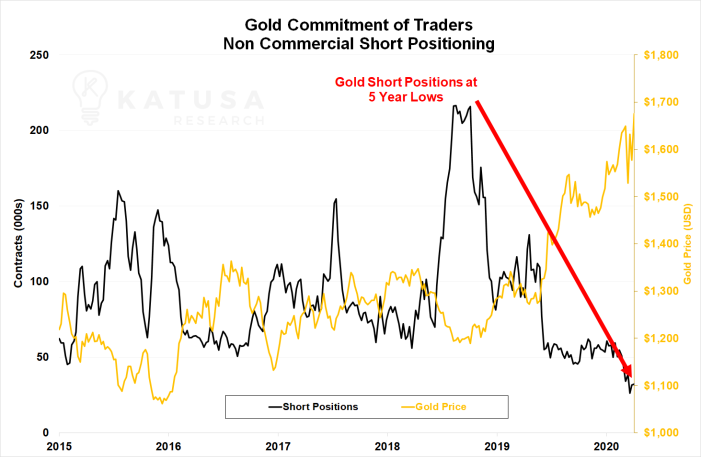 From a technical standpoint, a longer-term pattern is forming where gold may test the major resistance band around $1,750-$1,800. 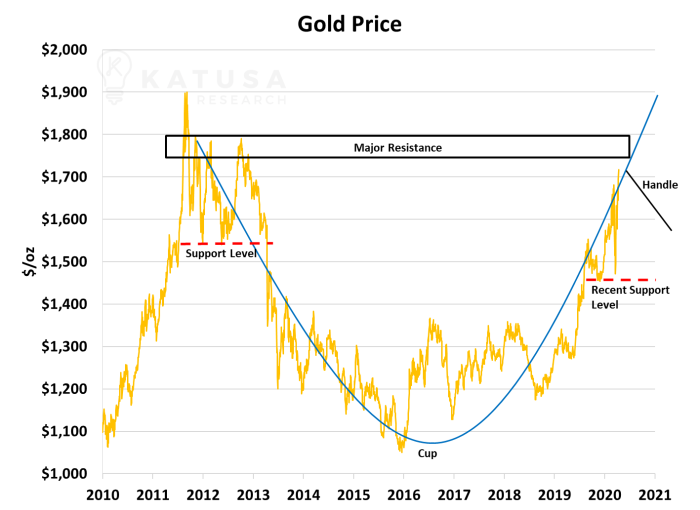 A classic Cup & Handle formation could occur where gold pulls back to test the recent support level. I’m not a TA guru, but I do know the best in the business.  I don’t base any of my decisions on any one fact, which is why I also pay attention to what the TA charts are saying.

The key is this: Can gold consolidate above the $1,750 range for a couple of weeks?

If so, we’ll have created a new base. If not, the short crowd will be slamming gold hard.

But if gold continues to rally, there could be a higher support level formed similarly to what developed back in 2011-2013.

How high gold will go is anyone’s guess, but a pullback is expected at some point.

We’re closely watching this as well as there’s been a recent support line forming. 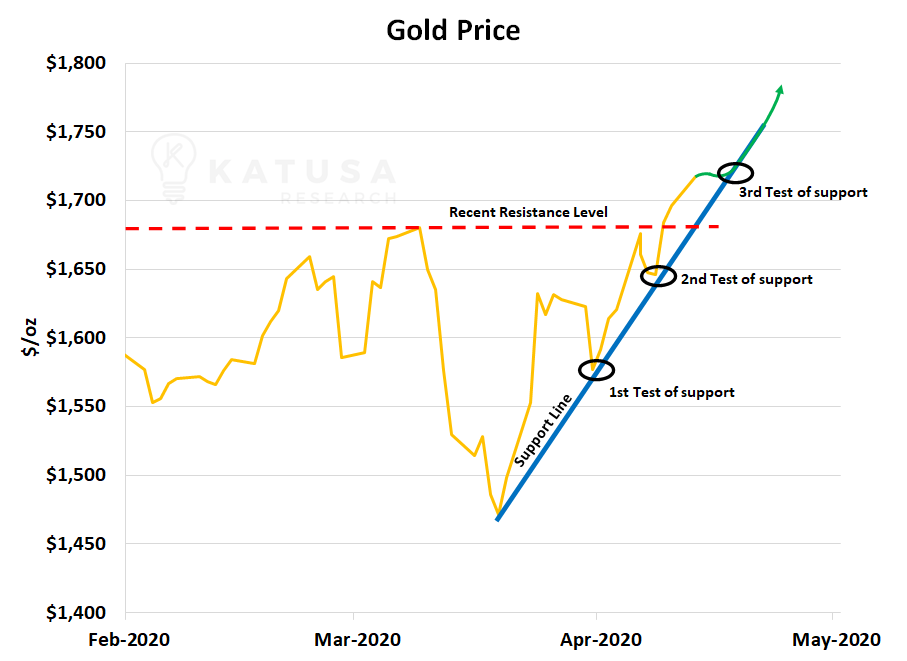 The line has been tested twice already and is shaping up to get tested a 3rd time.

If this forming trend continues the gold price will rise even further. If not, it may fall into the cup and handle formation shown earlier.

The next 90 days will be incredibly exciting and important to the price of gold.

What is the GOFO rate?

In simple terms, it’s the rate brokers in the London Bullion Market are willing to swap physical gold for U.S. Dollars at a future date.

The future date is anywhere from one month to a year later.

This is an alternative measure to the spread between gold futures contracts and the spot price.

In contango, there’s a lack of liquidity in the gold bullion markets. This often leads to a huge rally in physical gold prices due to arbitrage. And we’ve been at extreme contango levels the past 2 weeks.

Unfortunately, the LBMA stopped publishing this data back in 2015.

So instead, we look at the Implied Gold Lease Rates – which is the cost of storing gold in a bonded and secured vault.

These vaults are the same ones which are approved by the CME or the London Metals Exchange for storage and settlement of futures contracts.

As you can see in the chart below, gold lease rates are nearly all negative for maturities under 12 months. Here’s what that means… 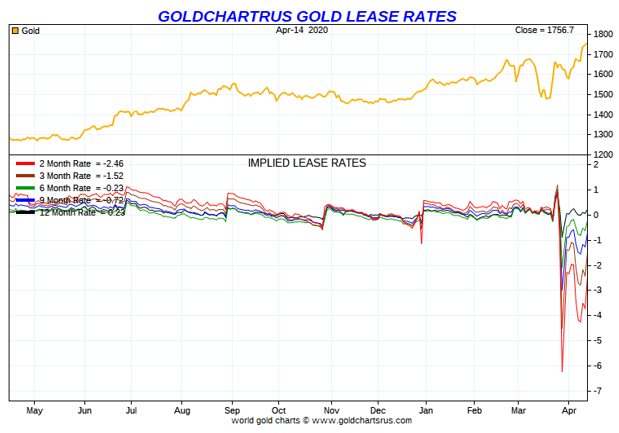 This is comparable to an incident at a Danish bank where, for the first time in history, they issued covered bonds with a negative coupon.

That means bond holders had to pay interest to debtors for the privilege of lending them money.

In fact, the short-term gold lease rate went below -5% at one point.

The Coronavirus made it impossible to deliver gold bullion between London and New York.

There were 2 main factors:

Mine Shutdowns and Offline Gold Production

Our current count indicates that 338 mining operations have been shut down worldwide due to COVID-19.

Ramping up production cannot happen overnight and it can take mines as long as 21 days to resume full production.

The chart below shows that 7 gold producing mines will be back online this week. 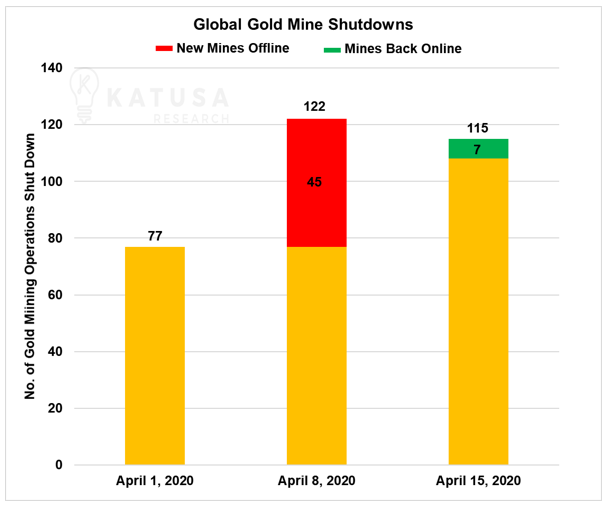 At least 23 gold producers have suspended their 2020 guidance due to anticipated or actual disruptions to their mining projects. 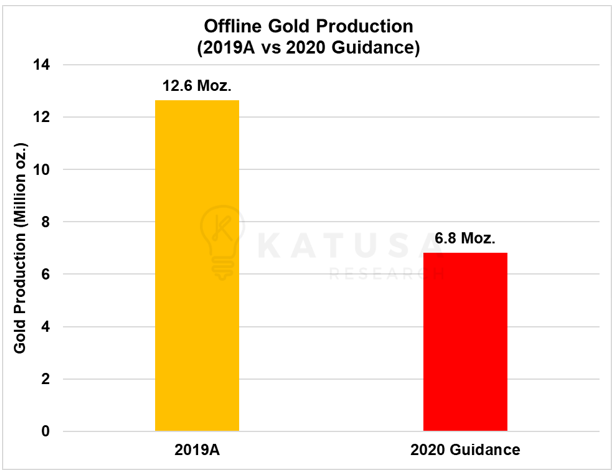 Bear in mind that while these numbers understate the true amount of gold production that’s currently offline, only a fraction of those 6.8 million ounces is likely to remain a production deficit for 2020.

We expect many of these mines to be back online before the second half of 2020, but not without hiccups (remember the Yugoslavian mines I mentioned last week?)

It’s difficult to forecast how high the gold production deficit will be for each mine that comes back online – it could be anywhere from 50% to as low as 1%.

The implications will be different for each gold miner, but unlikely to move the price of gold either way.

Many gold royalty companies and gold producers are trading at over 200% above their Net Asset Value.

Gold will do well, but don’t overpay.

This article is supplied courtesy of Wealthpress.com

P.S. The most incredible insights are sometimes the simplest… and that’s exactly the case with the trading secret Lance Ippolito is about to reveal.

He's sharing a trading paradigm so simple… so straightforward… you’ll drop your jaw and wonder, “Why didn’t I think of that!?”

Here’s your chance to see how one basic trick is responsible for doubling -- or even tripling -- positions over and over again in just 24 hours.