I wanted to take a moment to write on here and talk about this situation we find ourselves in.

The markets are falling. You’re hearing a lot about the “r” word (recession) or even the “d” word…

We’re not supposed to go anywhere. We’re fearing an invisible threat. And through it all, we’re watching our money drip away…

Have I made it sound bad enough yet?

Things stink right now. I’m not going to pretend that they don’t…

The most important thing now is getting the virus under control. And there’s tons of hope on that front.

In the past week, it feels like the response nationwide and state-by-state has gotten substantially better. We’re all taking this seriously. We’re all protecting ourselves and those around us.

Many labs around the world are working on vaccines that are in various stages of production.

And day by day, we get closer to summer, which many experts hope will help limit the spread of COVID-19.

I’m not a scientist. I don’t know much about immunology. But when I watch the TV, it feels like things are better now than they were a week ago, at least from a response situation.

Things will probably get worse before they get better. But we’re unified in attacking the threat now, and that’s better than where we were one week ago.

I truly believe that this market will create opportunities for us.

First of all, there are strategies for bear markets.

A lot of traders don’t even remember trading a bear market. If your trading career is younger than 10 years old, you’ve really basically never seen anything but a bull market.

And that’s great! But I promise you, smart traders can make a bear market work for them (I know because I’ve done it before, back when I was in my early twenties about 12 years ago…)

And Jim is right. When something is suffering, something else is going up. In times of crisis, think about the things you use most. What’s in your medicine cabinet? Your pantry? Your freezer?

Those are the things that are going to do well.

Clorox is spiking right now in one of the most panicked, selling markets we’ve ever seen. Look at that candlestick on the far right! 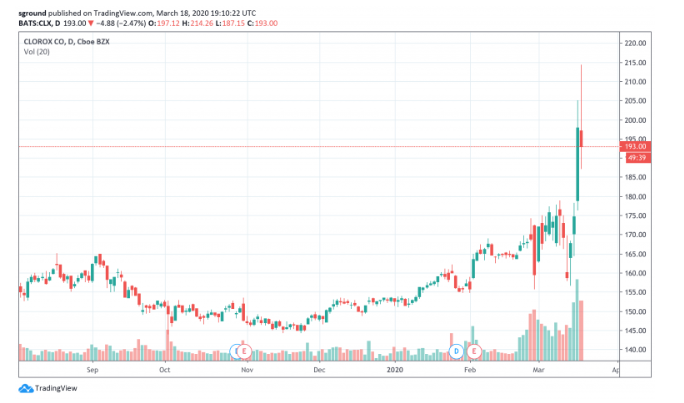 I don’t agree with Jim, though, actually. Because it’s pretty obvious with something like Clorox that this is a temporary spike. So I’m going to be looking to gain on the bearish movement that’s almost certain to come in the near future (that’s not a trade recommendation by the way. Just something to pay attention to).

On top of everything else, there’s a real chance that we see a V-shaped recovery if all of this goes well. If we remove the virus quickly, people go back to work, and the government already pumped money into the economy like they’re claiming they plan to right now, then we could see a booming economy again in no time.

The underlying fundamentals haven’t changed much yet. The economy is still very strong in theory. It’s all about timing.

So don’t give up hope. Because there’s opportunity whichever way this thing goes.