Gold surged higher this week as  the US Federal Reserve once again had to step up the rate of capital and credit fabrication from thin air we have been trained to call “stimulus” but which is really just another count of fraud against future generations.

This time, its a $100 billion injection into the overnight repo market, where funds and banks who can’t manage a checkbook to save their lives are bailed out every night.

You’re most likely indifferent to it: nothing you can do about it, and it doesn’t perceptibly affect you in any meaningful way, so who cares? 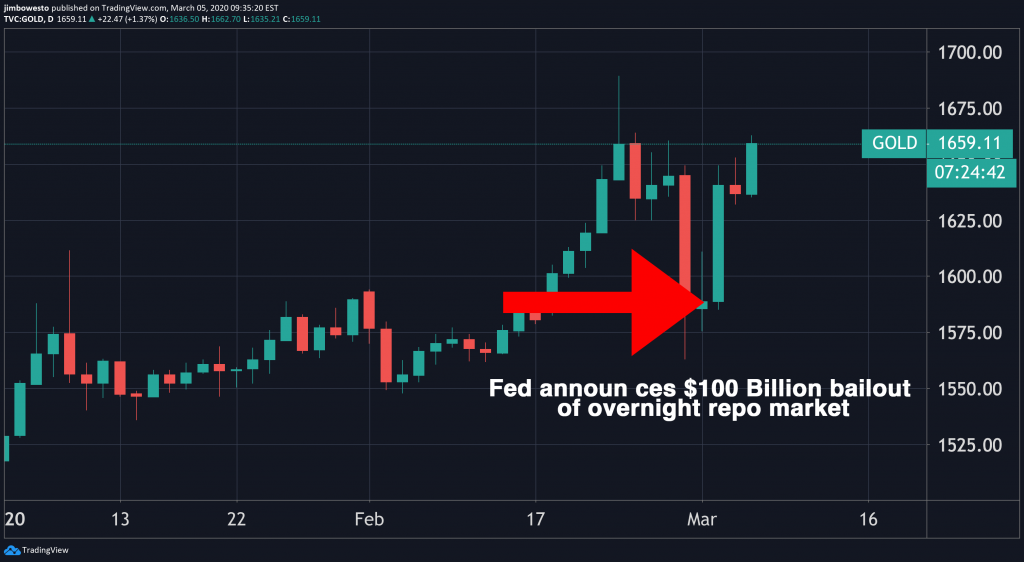 With that news crossing the wire, gold shot up dramatically from $1,586 on Monday to $1,656 at time of writing, as worried investors clambered aboard the ETF bandwagon to capture the evident premium gold offers when purchased in ever-diluted USD.

As reported in the Wall Street Journal, even the injection of $100 billion wasn’t enough to satisfy demand from banks, which topped out above $111 billion.

What does this mean in the bigger picture, and why should you care?

What this means is that increasingly, the financial system is depending on the Fed to just print more money for their own botched cash flow management, knowing that the Fed will step up with the welfare check, rather than risk another explosive meltdown like the last one that happened at the end of 2008.

The banking system – an industry with 20X more instances of psychopathic behaviour than the rest of the population – has realized that they can force the Fed into lowering rates and printing money they don’t have just by withholding the cash they do have from the overnight repo system.

The intensely watched Fed, for its part, understands that the financially clueless general public regards “Quantitative Easing” as a magic bullet from God’s own gun that, when fired, is cause for celebration! So they are more than happy to oblige with such intoxicating headlines.

But looking around the world right now, the rate of capital fabrication by central banks has taken on a whole new volumetric rate increase.

Under cover of such fear-inducing headlines as “coronavirus” and “trade wars”, the banks have become the biggest large-scale buyers of ETFs and Index Funds that cause the rest of the market to jump on the bus and join the party.

Its now been over a decade since the small crowd of Google-marginalized observers have been warning that the whole quantitative easing – endless debt machine is only increasing the pressure of mathematical impossibility against the fraud that is the USD, and increasingly the Euro and Yuan and Yen.

I bought my farm in the country in part by selling some gold holdings, because you can’t eat gold.

And when this whole thing goes into terminal meltdown, the only two commodities worth owning will be land, and gold. Oh uh…and guns. And ammo. Lots and lots of ammo.

Well, Roger Scott has a system designed to pinpoint exactly those types of stocks -- ones with the ability to multiply account sizes.

Don't miss out on Roger's hidden wealth building secret that could turn $1,000 into over $8 million

Get the secret now.