The Biggest Turning Point Is Right Around the Corner

I recently told you “the biggest market turning point is right around the corner: Increased volatility.”

It was a warning… because most traders lose money when the market gets volatile and it isn’t going straight up. People simply aren’t prepared — we’ve had a decade of relatively smooth sailing.

But markets have a way of pulling the rug out from under investors’ feet when they least expect it. And that’s when you find out “who has been swimming naked,” as Buffett would put it. 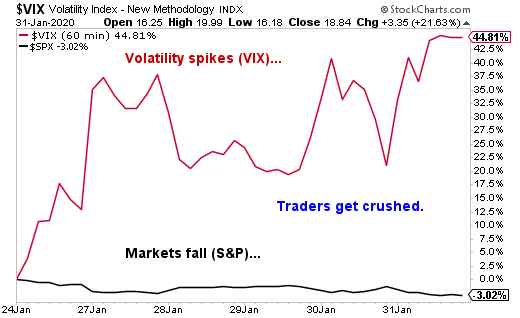 When I warned that volatility would spike, I didn’t know it would happen the next day or the exact reason. I don’t have a crystal ball…. but I do know that markets don’t go up in a straight line forever and that volatility is mean-reverting.

The point was to remind you to prepare for the unexpected.

The way I do that is with my Alpha Rotation system — it’s designed to crush the market and grow portfolios even when the unexpected strikes.

It does that by going long sectors in the S&P 500 (using ETFs) most likely to outperform and short a sector that’s likely to lag. That built-in hedge makes it my “sleep well at night” system.

I’m in the positions two weeks at a time, and when I wrote to you my positions we were up 37%.

Here’s an update on those same positions:

Our 37% gain has turned into 90% during a very difficult week for traders.

As you can see above, my short position in Energy paid off big time, delivering a 362% return. But that’s not all, Utilities, which are considered a safe haven, are up 135% thanks to the recent turmoil.

Not every position is up, and that’s not the goal with this system. Instead, I think of the four trades as one position designed to beat the market with less risk.

That’s exactly what we did over the past two weeks, which is not surprising. Since 2010,

Alpha Rotation has helped me and a group of traders outperform the S&P 500 13-1.

I've closed these trades and have four new ones.

The trades will be similar: I’ll be long three sectors I expect to outperform and short one

I expect to lag. Yes, it’s that simple, but I truly believe this is the best all-in-one system for traders who simply want to crush the market.

And if you want me to send you to the four trades let me know here.

This article is supplied courtesy of WealthPress.